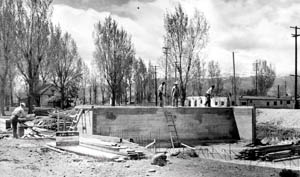 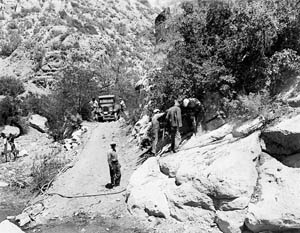 In the midst of research, we came across this nice historical piece from the Reno News & Review. Published in 2008, the article offers a window into the world of New Deal Nevada. We’re reprinting just a small portion of the article here. Follow the link below for the full story:

How the New Deal built Nevada

The Depression in Nevada was beaten back by workers who built, planted and even died for the state
By Dennis Myers
[email protected]
This article was published on 05.15.08.

Dominick Gadamowitz was born in Flushing, N.Y., in 1918, the oldest of 11 children. At age 13, two years into the Great Depression, he dropped out of school to work in his father’s business as a construction laborer.

“I felt as if I had an obligation to help Pop feed the rest of the family because we were really beginning to feel the effects of the Depression,” he later said.

Then in 1935, another opportunity came his way—a new federal program called the Civilian Conservation Corps.

“This was my chance to get away from all of the problems at home and still be able to help provide for my family. … My best friend and I enrolled in the CCC at our local post office. Within two weeks we were sent to Fort Dix, New Jersey, for a medical, which we both passed. We learned that we would be working at Battle Mountain, Nevada. We were sent home to gather our clothes and inform our parents of where we were going, how long we would be there, and any other necessary information that they might have needed to know. Later that week, we rode across country by train to Nevada.”

The CCC is often described as a means for rural youth, who normally might never have traveled more than 50 miles from their homes, to see the nation. It also worked the other way around. It was a way for urbanites like Gadamowitz to see places like Battle Mountain. The creation of the CCC and other New Deal “alphabet” programs began 75 years ago this year.

One day in 1920, a train that included the private car of Democratic vice presidential nominee Franklin Roosevelt pulled into Las Vegas for a few minutes on its way to California. The candidate stepped off the train while he waited, chatted with a few local folks, said some nice things about former U.S. Sen. Charles Henderson of Nevada, then climbed back on the train and continued on his way.

That unplanned appearance was about the extent of Roosevelt’s personal knowledge of the state that would one day benefit more than any other from his New Deal.

“Per capita expenditures of selected New Deal agencies from 1933 to 1939 were greater for Nevada than for any other state,” historian Russell Elliott wrote in 1973. “Not only was Nevada first in total per capita expenditures, but first, also, per capita in loans, Civil Works Administration (CWA) and Civilian Conservation Corps (CCC) funds, and funds for public roads.”

This was not peculiar to the New Deal. Nevada had long been a welfare state, living off the taxes paid by people elsewhere, more so than any other state. In 1924, five years before the stock market crash, Nevada received 200 percent more funding from the federal government than it contributed in taxes.

“Nevada was not industrialized like some states were, and [it] suffered in that way,” according to historian Phil Earl.

But the New Deal brought an investment in Nevada unlike any before. It was like a blitzkrieg, only a constructive one—schools and bridges, roads and dams, drought projects and reforesting swept across the state like a benevolent army. ….