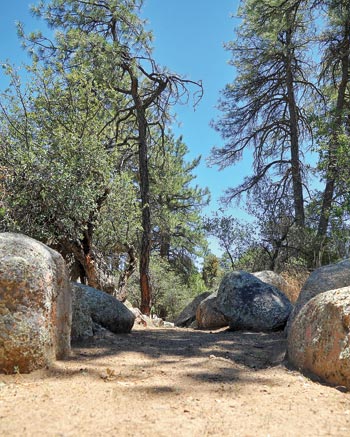 PRESCOTT – Times were tough in Prescott 75 years ago, but that did not dim the ambitions of a troop of transient workers stationed at the old Prescott Fairgrounds.

Not only were the workers busy building many of the structures that still exist at today’s Prescott Rodeo Grounds, but the Civilian Works Administration (CWA) participants also were preparing for construction of an outdoor amphitheater that would span the massive rock formations behind the fairgrounds’ Doc Pardee and Danny Freeman buildings.

Although the amphitheater plans went away when money for the Depression-era work programs ran out, the aborted venture did leave behind one lasting legacy: a network of trails that circle through the rocks, leading to the summit.

Prescott historic preservation specialist Cat Moody said the trail construction was likely done as one of the preparations for the natural amphitheater.

“The amphitheater never got built,” Moody said. “But that is why there are trails there.”

Through the years, however, the “Trail to the Top” became obscured with overgrown brush and dirt. By all accounts, no one at the city knew that the trails existed.

So, when the city parks department and the Over the Hill Gang volunteers set out to a build a trail in the scenic rock pile at the rodeo grounds, they were shocked to find a well-defined route already in place.

“All of these trails were in here, and nobody knew about them,” Chris Hosking, the city’s trails coordinator, said recently as he walked along the route.

With large rocks already lining the sides of the trail, Hosking said, “It only took us about 200 volunteer hours” to get the trail ready for use.

Along with clearing away the brush, the work included redefining the trail bed, cleaning out a rock culvert, and painting white dots on the rocks along the trail to alert hikers to the best route.

For the past several weeks, the Trail to the Top has been open to the public, and Hosking said it got plenty of use during the July 4 Frontier Days Rodeo.

Although steep in some areas, the trail is only about a half-mile long, and Hosking pointed out that hikers get a big pay-off for their efforts. “It’s an awesome view right in the middle of town,” he said from the summit, pointing to the up-close vista of Thumb Butte.

Hosking gives most of the credit for the trail to those earlier workers who toiled on many of Prescott’s historic structures.

“Ninety-nine percent of the trails were already here; we just unearthed them,” Hosking said of the Trail to the Top.

Moody reports that the early- to mid-1930s CWA camp – named “Camp Prescott” – was intended to accommodate as many as 300 workers.

The camp was designed to put stranded out-of-state travelers and other out-of-work men to work on a variety of local projects, Moody said. The CWA – the predecessor of the Works Progress Administration (WPA) – was a part of the New Deal program that gave jobs to millions.

The mission of the CWA camp was to complete numerous public works projects around the community – not the least of which was the refurbishment of the fair/rodeo grounds off Prescott’s Rodeo Drive.

Along with the Doc Pardee and Danny Freeman buildings, the workers also produced the rodeo grounds grandstand, an administration building, an infirmary, two barracks, a bakery, a kitchen and mess hall, and two water wells. Most of the buildings no longer exist, although the grandstands are still in use.

In addition, remains of a fishpond are still visible at the entrance to the trail. Hosking said Eagle Scout hopeful Eric Sparks is working on further improvements at the trail entrance.

Parking for the Trail to the Top is available in a lot off Rodeo Drive and in dirt pullouts along Schemmer Drive, Hosking said.