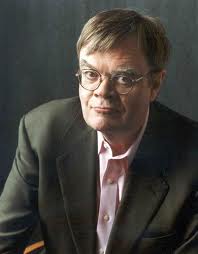 Public radio icon Garrison Keillor celebrated the birth of the WPA this morning with this story: “On this day in 1935, Franklin Roosevelt created the Works Progress Administration, the New Deal’s largest and most ambitious agency. During its run, which ended in 1943 and cost about $11 billion, the WPA employed 8.5 million out-of-work people on 1.4 million individual projects; it built 651,000 miles of roads, streets, and highways; constructed or repaired 124,000 bridges, 125,000 public buildings, more than 8,000 parks, and nearly 900 airport runways. The projects had to provide a real and lasting contribution, and could not take business away from private companies.

It wasn’t always the most efficient operation, however, and its critics gave it nicknames like ‘We Poke Along,’ ‘We Play Around,’ ‘We Piddle Around,’ and ‘Working Piss Ants.’ WPA employees were derided as ‘shovel-leaners,’ an accusation John Steinbeck addressed in his essay ‘A Primer on the ’30s’: ‘It was the fixation of businessmen that the WPA did nothing but lean on shovels. I had an uncle who was particularly irritated at shovel-leaning. When he pooh-poohed my contention that shovel-leaning was necessary, I bet him five dollars, which I didn’t have, that he couldn’t shovel sand for fifteen timed minutes without stopping. He said a man should give a good day’s work and grabbed a shovel. At the end of three minutes his face was red, at six he was staggering and before eight minutes were up his wife stopped him to save him from apoplexy. And he never mentioned shovel-leaning again.’ ” –Writer’s Almanac, May 6, 2013

One comment on “Happy Birthday, WPA! From Garrison Keillor:”