“We cannot continue to deny and postpone the demands of our own people while spending billions in the name of freedom elsewhere around the globe. No nation can exert greater influence or power in the world then it can exercise over the streets of its own capital” –Robert F. Kennedy

In Washington, the focus has been about cutting spending and balancing the budget. We’re told by politicians on both sides of the aisle that the United States has to start “living within its means.” I believe that narrative is throwing gas on a raging fire and must be extinguished for the nation to see shared prosperity again.

The Congressional Budget Office estimates that the wars in Afghanistan and Iraq will cost at least $2.4 trillion by 2017. Couple this with the Bush Tax cut, which total over $2.8 trillion in lost revenue, plus an additional $3.4 trillion lost in revenue over the last ten years due to slow economic growth and it’s clear why there’s fiscal instability.

The effects of this fiscal instability can be seen in cities such as Camden, Trenton and Reading. Unemployment, homelessness, hunger, and poverty rose steadily in these cities over the last decade while hundreds of billions of dollars were spent on wars halfway around the world. Their education system is in shambles, emergency services are overburdened and buildings are becoming increasingly dilapidated due to neglect or abandonment.

During the Great Depression, $32 billion(about $500 billion today) was spent by FDR’s New Deal to combat unemployment, homelessness, hunger, and poverty. The New Deal contributed substantially to ending the Great Depression, even though it took World War II to restore full employment. However, the New Deal served the general welfare of the nation with projects that still stand to this very day. Conversely, the Federal government spent $288 billion($3.4 trillion today) to fight World War II. Massive spending by the Federal government propelled the American economy into unprecedented post-war power and wealth. 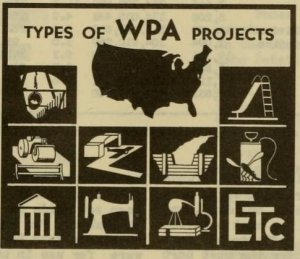 Whether fighting overseas, working in a factory or paying higher taxes, the American people shared the burden of war. The same could not be said for the wars in Iraq and Afghanistan, where the burden was left to the troops on the ground. Lets be honest with ourselves, nothing was asked of the American people. We continue to live in a bubble, unaware or indifferent to suffering at home or abroad.

The 2009 stimulus, totaling $787 billion, allocated $126 billion for infrastructure over a two year period. The vast majority of the stimulus was tax cuts for small businesses and the middle class. Thus, to claim the 2009 stimulus was a massive spending bill is simply untrue. Let me put that infrastructure spending in perspective. In 2012 alone, the United states Army requested $215 billion in funding. That’s more then the entire military of both China and Russia combined!

The 2013 ASCE report card for America’s infrastructure estimated the cost to rebuild and restore the infrastructure of the United States was $3.6 trillion. If the Federal government spent $3.4 trillion to fight World War II and $2.4 trillion in Iraq and Afghanistan, then it can surely invest the same amount on infrastructure here at home.

The president offers a weak plan on infrastructure and Republicans in Congress offer next to nothing. The only way the nation’s infrastructure is going to be restored is by annually investing at least an additional $100 billion over the next twenty to thirty years. Link the Army Corps of Engineers with the Department of Labor to create a 21st Century Works Progress Administration. In order to make the WPA a fixture in the Federal government, a WPA academy should be created similar to that of a West Point or Annapolis. Build the WPA academy within a poor city and make it the template for future renewal and growth across the nation. Once WPA officers complete their training, send them to various parts of the nation to assist in infrastructure projects and disaster relief.

This much is clear, the current policies in place by the Federal government are not serving the general welfare of the nation. This nation, if it is to endure, must realize challenges are ahead. Nearly every generation of Americans had a challenge, some greater then others. While a majority of Americans see failure and decline, I see prosperity. Reaching that prosperity won’t be easy, nothing worthwhile ever is. Bobby Kennedy once said, “Tis’ not too late to seek a newer world.” Let’s reach that newer world together as citizens united in common cause.

Another version of this essay was published on PhillyBurbs and in the NJ Times. Reprinted here with permission of the author.