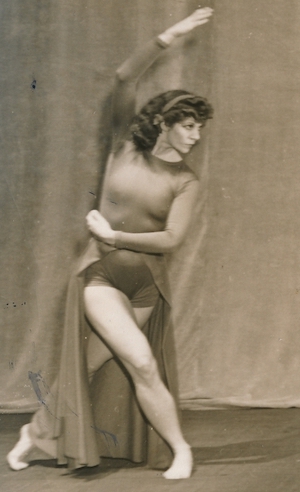 New York Times later recalled: “Largely through her efforts as the first president of the American Dance Association, dance was included in the Federal Theater of the Works Progress Administration.  She served as the theater’s chief choreographer in New York from 1937 until 1939” [1].  Tamiris saw the Federal Theatre Project (FTP) as a great opportunity to help struggling performers, bring modern dance to the people, and express her concerns about societal problems, such as racism, unemployment, and war.  “She alone of all the major dancers working in the Thirties gave up her career, her [dance] group, almost her very self for the sense of purpose she felt in the Project” [2].

Helen Tamiris was born Helen Becker on April 23, 1902, in New York City’s Lower East Side, to Isor and Rose Becker, Jewish immigrants from Russia.  She had three younger brothers: Maurice, Samuel, and Peter.  The family was poor, but proud of their Jewish heritage and culture.  When Tamiris was eight she started taking dance lessons at the Henry Street Settlement House, and by the early 1920s she was in full pursuit of a dancing career [3].  Tamiris danced for the Metropolitan Opera, the Bracale Opera Company and, in 1928, toured Europe to critical acclaim.  Her style of dance—boiling with energy and based in natural movements rather than “High-flying theories”—captivated European audiences [4].  By the time the FTP was created in 1935, Tamiris was a powerful force in the modern dance movement and had her own small dance school, “Tamiris and Her Group.”  But she still had greater aspirations.

By January 1936, Tamiris’s advocacy had persuaded Hallie Flanagan to create the Federal Dance Project (FDP), a “semiautonomous unit” within the FTP.  One month later, Tamiris was brought in as a choreographer [5].  Between 1936 and 1939, she choreographed and performed in several FDP productions, including Salut au Monde, Trojan Incident, and Adelante.  How Long, Brethren?—which she also directed—was her most successful production, running for weeks to standing-room-only crowds at the Nora Bayes Theatre in New York: “The simple and honest movement of the eloquent design made the opening night audience stand up and cheer… the reaction was so whole-hearted and spontaneous that the show was interrupted many times by applause and shouts so loud the dancers could not hear the orchestra or the chorus in the pit” [6]. How Long, Brethren? was based on African American songs of protest, had an African American choir, and was hailed as an example of the FTP’s commitment to racial equality [7].

After the FTP and FDP were eliminated by Congress in 1939, Tamiris struggled to find direction.  Now in her late 30s, she was, “For once… out of step – not in tune with her era”, and viewed by some as too far left on the political spectrum [8].  Fortunately, the difficulties did not last.  She regained her footing and between “1943 and 1957, she choreographed eighteen musical comedies, fourteen of which had runs on Broadway, six of which were long runs…” [9].  Tamiris and her new dance company (which included her husband Daniel Nagrin) put together a dance program for the 25-city tour production, The People’s Bandwagon, which appeared “in movie theaters for the purpose of reelecting Franklin D. Roosevelt in 1944” [10].

Helen Tamiris died on August 4, 1966, survived by her husband and her brothers Maurice and Peter [11].  As one scholar recently noted: “Tamiris purposefully created dances that reflected her times, but these dances still hold resonance today because they also speak more generally to what it means to be human” [12].