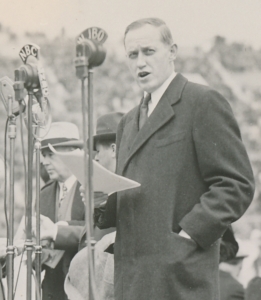 Harry Hopkins led three of the largest New Deal programs: the Federal Emergency Relief Administration (FERA, 1933-1935), the Civil Works Administration (CWA, 1933-1934), and the Works Progress Administration (WPA, 1935-1938) [1]. He was also a key figure in several other New Deal polices & programs, e.g., an advisor in the Public Works of Art Project (PWAP) [2] and a member of the Committee on Economic Security – the working group that helped shape the Social Security Act [3]. From 1938 through 1940, Hopkins was the U.S. Secretary of Commerce, and during World War II he acted as a liaison between President Roosevelt and Winston Churchill. Throughout the New Deal, Hopkins was a key advisor and close friend of the president [4].

Hopkins was born in 1890 in Sioux City, Iowa into a religious, but cash-strapped family. At age 11, the family moved to Grinnell, Iowa, which set the stage for Hopkins enrollment at Grinnell College in 1908, where he majored in history and political science. At the time, Grinnell College embraced the “Social Gospel” movement, which mixed “theology and ethics with politics and sociology.” Grinnell promoted the application of Christian principles to “every department of human life” and was a revolt against “child labor, urban slums, an undemocratic concentration of wealth, political corruption, and the dehumanizing effects of industrialization…” This education, in addition to his mother’s strong religious convictions, laid the foundation for Hopkins’ belief that government should be an active participant in social justice and social improvement [5].

Out of college in 1912, Hopkins found employment as a social worker in New York City, which was a hotbed of social reform efforts during the Progressive Era. He worked at the Christodora Settlement House, the Association for Improving the Condition of the Poor, and the American Red Cross. Seeing so much poverty had a strong effect on Hopkins, and in 1916 he wrote to a friend: “The chief thing in this life to my mind is to work toward the founding of an ideal state, in this earth, based on social justice which will make for happiness for us all” [6].

Hopkins excelled as a social worker and in 1931 became the executive director of New York State’s Temporary Emergency Relief Agency (TERA) – a work-relief agency created in response to the Great Depression [7]. On May 19, 1933, at the height of America’s unemployment crisis, newly-elected President Franklin Roosevelt asked Hopkins to come to Washington, DC, to run FERA, an early New Deal program to help states cope with the vast numbers of unemployed workers and supplement their devastated budgets [8]. Over the next 5 years, Hopkins would labor tirelessly to provide work for over 10 million jobless Americans through the FERA, CWA, and WPA programs.

Hopkins could be abrasive towards critics of the New Deal, but he was unwavering in his support for the downtrodden. In 1936, before a crowd of thousands at the Louisiana State University football stadium, Hopkins praised the formerly-jobless men and women of the WPA: “The things they have actually accomplished all over America should be an inspiration to every reasonable person and an everlasting answer to all the grievous insults that have been heaped on the heads of the unemployed” [9]. Indeed, many of the WPA’s hundreds of thousands of public works are still in use today.

Harry Hopkins died on January 29, 1946, from hemochromatosis, an affliction that had racked his body for many years [10]. The next day, Winston Churchill wrote: “A strong, bright, piercing flame has burned out a frail body… His love for the causes of the weak and the poor was matched by his passion against tyranny… We do well to salute his memory. We shall not see his like again” [11].