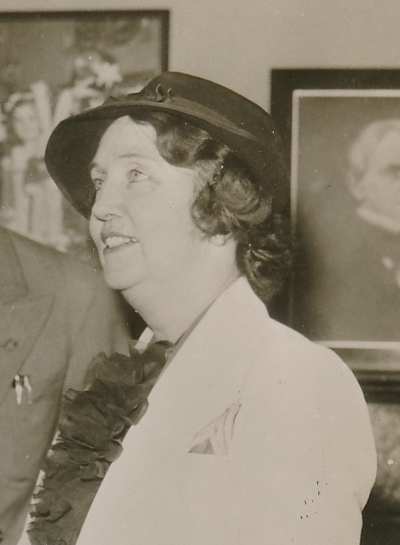 Ellen Sullivan Woodward was the director of the Women’s Division of the Federal Emergency Relief Administration (FERA) from 1933 to 1935; director of the Women’s and Professional Projects of the Works Progress Administration (WPA) from 1935 to 1938; and a member of the Social Security Board from 1938 to 1946 [1]. She was considered “the second highest ranking woman appointee in the Roosevelt Administration” [2] and later recalled that the “most challenging and satisfying experience” in her life was working with Harry Hopkins and his work-relief programs [3].

Ellen was born in Oxford, Mississippi on July 11, 1887, the fourth of five children of William Van Amberg Sullivan and Belle Murray. After her mother died of tuberculosis when Ellen was 8, she grew closer to her father, a successful lawyer and politician who served in Congress from 1898 to 1900. Ellen received her education at Oxford Graded School (Mississippi) and Sans Souci Female Academy (Greenville, South Carolina). She had wanted to attend college but yielded to her father’s view that college “ruined a woman’s charm.” Despite such traditional views, her father seems to have encouraged her burgeoning interest in politics [4].

Ellen married Albert Woodward on June 27, 1906, and the two settled in Louisville, Mississippi, where she gave birth to a son, Albert Woodward, Jr., in 1909. She became involved in many local organizations, such as the Daughters of the American Revolution (DAR), Louisville Good Roads Association, Red Cross Society, Fortnightly Club and, during World War I, a local defense committee. Unfortunately, tragedy struck when, on February 6, 1925, Ellen and her son found Albert Sr. dead on the ground near their house. He had suffered a heart attack, and Ellen Woodward was a widow at 37 [5].   At the time of his death, Albert was a member of the Mississippi House of Representatives. Ellen was elected to finish his term, thus beginning her long career in politics and government.

In August 1933, after serving Mississippi in several capacities and vigorously promoting the New Deal agenda as a Democratic committeewoman, Woodward was appointed by Harry Hopkins to lead the Women’s Division of FERA and later to be director of the Women’s and Professional Projects section of the WPA [6]. Woodward worked hard to open up public works jobs to women, with the result that hundreds of thousands of unemployed women would find work in school lunch programs, nursery schools, libraries, social services, historic preservation projects, and more [7]. She also defended African American women in southern states from complaints that they were making too much money on WPA jobs, saying, “Government isn’t justified in paying people starvation wages because they only got that much before” [8]. In 1938, she vigorously defended the WPA before the communist-hunting “Dies Committee” in Congress, engaging in a heated argument with Chairman Martin Dies (D-Tex.), calling the committee “un-American,” and telling the committee that they were jeopardizing the “daily bread” of relief workers [9].

Woodward held several other positions in federal government before retiring in 1954. She had a difficult retirement, suffering from physical ailments, memory problems, and the loss of her “New Deal circle of friends” [10]. She died on September 23, 1971, survived by her son Albert and her sister Elizabeth Sullivan Dutcher [11]. Unfortunately, Woodward’s enormous New Deal legacy is remembered by few.