Finding New Deal sites is a delightful scavenger hunt – great fun and full of puzzles to be solved. Whether you go looking for them or just stumble across them, there are a number of ways to find out if what you see is really a New Deal project.  So let the sleuthing begin!

Before you begin, familiarize yourself with the New Deal, which consisted of scores of laws and programs summarized on our website. The best known relief work agencies were the Works Progress Administration (WPA) and Civilian Conservation Corps (CCC), but there were lesser known ones, such as the Civil Works Administration (CWA), Federal Emergency Relief Administration (FERA), and National Youth Administration (NYA).

Older agencies were still at work with enlarged budgets, like the Treasury Department (post offices and government buildings), the Bureau of Public Roads and the Bureau of Reclamation – often helped by grants from the Public Works Administration (PWA), which was the primary funder for civic structures.  New Deal murals and sculptures were created under programs of the Treasury, CWA and WPA.

You should start with the Living New Deal map at livingnewdeal.org. It works on laptops, tablets and phones. Using the map on phones takes a bit of getting used to.  The best starting point is to click on ‘nearby’ and give permission to locate you, then click “geolocate me” and “apply”.  Bingo, up come all the sites near you on the map!

Click on any red dot and you get a small pop-up. Click on ‘More info’ and up comes the full project page. Some sites are well documented, but others are not and can use additional photographs and information.  There are, of course, thousands of sites we don’t have on the map, so keep your eyes open for those we’ve missed.

There is nothing better than visiting the site to see what’s there today.  Survey the site and take photographs of both general views and interesting details. Look for plaques and other historical markers (though they are often absent).  Ask people who work at the site for help; they probably won’t know the history, but may know someone on staff who does.

Walking or driving through a town or park, looking closely at the landscape, can sometimes yield New Deal treasures. While not an efficient method of research, it can be an enjoyable way to get out and about and a way to learn the visual cues that shout “the New Deal was here”.

What to Look For

In towns and cities, look first for public buildings, such as post offices, city halls and schools, which are often near the historic center – usually funded by the PWA. Many city parks and recreation facilities were built or upgraded by the WPA. Less obvious or hidden are such infrastructure works as streets, sidewalks, water pipes, sewers, treatment plants, street trees, and rock walls paid for or built by the PWA, FERA, CWA and WPA.

In rural areas, look for the work of the CCC and WPA in national parks, state parks and national forests. Almost all existing parks were improved with trails, restrooms, ranger stations, campgrounds, etc. Harder to spot are CCC reforestation projects and farm improvements like fences, ponds and windbreaks; CCC or Soil Conservation Service (SCS) erosion control works; or electric wires strung by the Rural Electrification Administration (REA).  Dams and structures by the Bureau of Reclamation and Army Corps of Engineers are usually easily found and well marked.

Many New Deal-era buildings have a distinctive look, particularly Art Deco designs – though many other styles were used. Park improvements were mostly done in Rustic Craftsman style at the time. New Deal murals are usually in Social Realist or American Regional style popular in the 1920s and 30s. Check our New Deal building styles page for an introduction to the many faces of the New Deal or check Wikipedia and online guides to architectural and artistic styles.

Needless to say, Internet searches can be fruitful for identifying New Deal sites and finding out more about them. Try searching by location, project name and various New Deal keywords. Such searches can lead to Wikipedia pages, photographs, newspaper articles, blog posts, books and more. As always, be careful to evaluate the reliability of the online sources you find.  Even Wikipedia regularly confounds WPA, PWA, and FERA.

We have many online resources linked on our Websites on the New Deal page, including WPAmurals.org and the Yale Photogrammar site with 170,000 Farm Security Administration photographs.

There are many books on the New Deal, and our website has a bibliography page with many valuable reference works. But the best sources on New Deal sites are histories of a single county, city or national park, or specialist writings on the CCC, artworks or bridges. One example is Marjorie Barton’s Leaning on a Legacy: The WPA in Oklahoma. Arcadia Books publishes thousands of local photographic histories, some of which are pertinent.

Some sources can be quite obscure, like trade journals of the day addressed to engineers, architects and planners, such as Architect & Engineer and Parks & Recreation.  Some valuable sources only exist as small pamphlets, like one on the CCC in Death Valley National Park.  Check out bookshops at National Parks and Historical Societies, as well as libraries.

Local city and college libraries almost always have relevant New Deal-era documents, newspaper clippings and photographs.  Most of these will not be on the shelves or digitized, or even well catalogued, as they are kept in scrapbooks, folders and boxes.  Always ask the librarians for help; most of them love to be consulted!

There are many relevant collections at big universities, state libraries and the national archives. We have, for example, found WPA photographs and record cards at the Los Angeles and Fresno city libraries and the University of Utah and an inventory of all WPA projects in Iowa at the Iowa State University Library. Look for dissertations on the New Deal at college libraries; we have created a bibliography of theses.

During the New Deal era, many local newspapers had articles on New Deal projects in their locality. Many such newspaper archives are now digitized and online: see, e.g., newspapers.com and newspaperarchive.com. These are pay-for-use archives, so check pricing and be sure it covers the newspaper you are interested in. Libraries usually offer such services free to their patrons on-site. Libraries often put old newspapers on microfilm, which is hard to work with, but such archives may be indexed.

Local historical societies and museums often have their own libraries, bookstores and archives, which can yield troves of books, pamphlets, records, photos and personal reminiscences of the New Deal era. They usually have staff who know the history of the place intimately and can direct you to sources.  Other local experts can be tracked down, such as college professors, history teachers, and retired civil servants, who know a lot about their locale. Such experts and New Deal enthusiasts are often walking encyclopedias who can save time wasted going blindly into libraries and archives.

School districts may have repositories of school records, like the Fort Worth Independent School District’s Billy W. Sills Center for Archives, which contains photo albums and yearbooks. City and county public works departments are another likely source of records.  State and federal agencies that worked with New Deal programs usually have archives and sometimes internal reports. These include state forestry and highway departments, soil conservation offices, and (air)port authorities. Among federal agencies, a couple examples are the online historical buildings survey by the National Park Service and a 2010 report on CCC activity by the Bureau of Reclamation.

See if your state has a state historic preservation office, then check to see if it has a database of historic and protected properties (hopefully, online). For example, Maryland Historical Trust maintains the Maryland Inventory of Historic Properties, which is searchable.  Call your state office and talk to people there to see if anyone has a special interest in the New Deal era, a state inventory of historic sites exists, or they have a collection of the nomination documents for historic sites (which can be a goldmine of information on a building or park).

The National Archives & Records Administration (NARA) has New Deal documents and photographs from across the country. The archives are divided among several regional depositories, like the one in San Bruno CA, and you never know which records are where until you look. For example, there is a WPA Newspaper Clipping file at the College Park MD archive. Unfortunately, most NARA records are not digitized and you have to visit their offices. Happily, all of their holdings are in the public domain (no copyright). The General Services Administration (GSA) has an online archive of New Deal Art in federal buildings.  It’s not the easiest to search, but is full of valuable photos and information.

What Information Should You Submit?

We need certain basic facts about the New Deal site(s) you discover:

Additional valuable information will include:

Please submit your findings to us using the online submission page.  If that is not convenient, you can mail materials to us at the Berkeley Geography Department or email them to [email protected].

Our RAs will review your submission and make additions and changes, as needed. You will receive a quick thanks for your submission, but getting it up on the map usually takes a week or two – so be patient!

If you have questions, contact us at [email protected]

Thank you for helping us build the Living New Deal map! 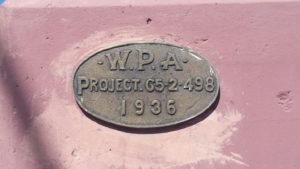 A bronze plaque found on the Pumphouse, to the left of the door. Image taken March 3, 2018. 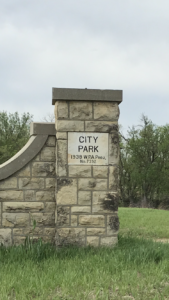 Submit a Site to the Living New Deal

Websites on the New Deal

Recommended Books on the New Deal