Ira Katznelson’s new book Fear Itself: The New Deal and the Origins of Our Time has been reviewed in the New Yorker. It’s a subscribers-only article, but here’s the beginning of the March 4, 2013 review by Louis Menand: 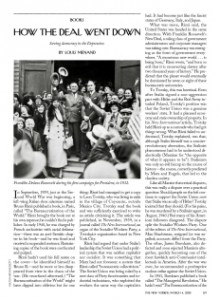 “In 1941, James Burnham published a book called “The Managerial Revolution.” The economies of the major powers, Burnham said, had fallen into the hands of a new élite: the managers, executives, financiers, and stockholders who owned and ran corporations, and the government administrators who regulated them. Burnham had earlier described the New Deal as “preparing the United States for the comparatively smooth transition to Fascism.” Why the world didn’t turn out quite the way that Burnham predicted is the subject of Ira Katznelson’s ambitious, fascinating, and slightly dark “Fear Itself: The New Deal and the Origins of Our Time.” There are already many histories of the New Deal in circulation. Katznelson thinks that much of the scholarship on the New Deal is “too insular and too limited.” For one thing, he says, it tends to cast Roosevelt as the hero. “Fear Itself” is a history of the New Deal from the point of view of Congress. There was no master plan, no guiding philosophy, for the reforms that Roosevelt oversaw. Some were his idea; some were Congress’s; some were left over from the Hoover Administration. Roosevelt was improvising. He certainly did not have a grasp of the concept of deficit spending. He was generally fiscally conservative, and in the beginning his policies were actually deflationary. One of his first acts was to cut the budget. Describes the split in the Democratic Party between Northern and Southern Democrats. Katznelson argues that the members of this Southern bloc were “the most important ‘veto players’ in American politics.” They maintained what he calls a “Southern cage” around New Deal legislation. Southern Democrats were almost unanimously supportive of progressive economic policies, but they were, in one respect, solidly reactionary. They were vigilant to resist any threat to what they sometimes euphemistically referred to as the Southern way of life but more often called, quite proudly, white supremacy. In spite of all the vigilance, the camel did get its nose under the South’s tent. The ultimate irony of Southern support for the New Deal and the war effort, as Katznelson shows in careful detail, is that it produced a powerful and interventionist central government that one day (following considerable non-state agitation and inspiration within the South) brought the Southern way of life to an end. Discusses how government, and the Democratic Party, changed after the New Deal, with the onset of the Cold War and the disenchantment of Southern Democrats. Writer situates Katznelson’s book alongside many other books about the New Deal, and discusses the history of worries about the emergence of a new ruling class composed of bureaucrats and technocrats. ….” Read more here.

Katznelson also published a short essay connecting the New Deal to contemporary politics in the Chronicle of Higher Education that same day (we need to get referred to his publicist!). Here’s a piece of the essay:

“Reminding us that ‘all historians are prisoners of their own experience,’ one of the most eminent historians of the New Deal, Arthur Schlesinger Jr., observed late in his life: ‘Conceptions of the past are far from stable. They are perennially revised by the urgencies of the present.’

With rising concerns about religious zealotry, military insecurity, and volatility in capitalist economies, it has become important to re-examine the borderlands where democracy meets fear. With the stalemate in Congress, it has become urgent to comprehend how representative democracy can operate to deal with the large problems of the day. With racial barriers falling, yet various measures of racial inequality increasing, it has become imperative to revisit the role race plays in shaping politics and society. Returning to the New Deal itself, we can project these troubling issues of today into sharp relief.

Eighty years ago, on March 4, Franklin D. Roosevelt proclaimed in his first inaugural address that ‘the only thing we have to fear is fear itself—nameless, unreasoning, unjustified terror which paralyzes needed efforts to convert retreat into advance.’ The climate of universal fear deeply affected political understandings. The rumble of uncertainty, a sense of proceeding without a map, was relentless and enveloping. Nothing was sure.

Over the course of the Roosevelt and Truman administrations, the country confronted three acute sources of fear: the deep worry generated by the disintegration and decay of democratic politics and liberal hopes in Europe, East Asia, and Latin America; exponential growth in sophisticated weaponry, reflected in an accelerating arms race both before and after World War II; and the racial structure of the Jim Crow South, a source of deep worry both for its defenders and its adversaries. In a decisive break with the old, the New Deal successfully crafted not just a new set of policies to meet those challenges, but also new forms of institutional meaning, language, and possibility for a governing model that had been invented 150 years before.

To see the effects of fear on the character of American democracy, we can rearrange the geography of New Deal history, making it both wider, by more closely connecting domestic and international affairs, and more narrowly focused, by homing in on how Congress remade the country’s institutions and policies, and on how Southern members of the House and Senate, with their commitment to a hierarchical racial order, affected the full range of New Deal policies and accomplishments. …” Read the rest of the essay here.

We are happy to say that Katznelson recently joined the advisory board of the Living New Deal. 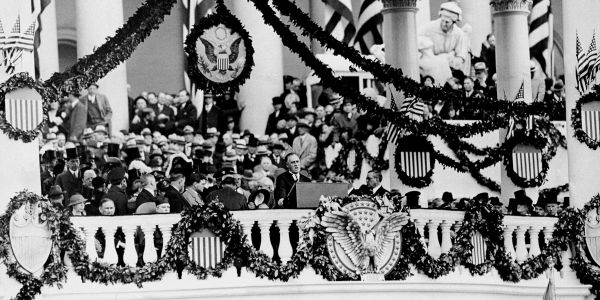