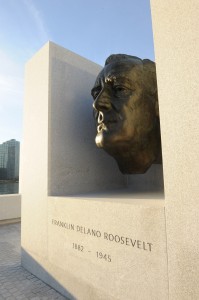 Forty years in the making, the Franklin D. Roosevelt Four Freedoms Park was finally dedicated on October 17, 2012. The new park takes its name from a speech President Roosevelt made on January 6, 1941 in which he said the way to justify the enormous sacrifice of war was to create a world centered on four essential human freedoms: freedom of speech and expression, freedom of worship, freedom from want and freedom from fear. The words were later incorporated into the charter of the United Nations.

The 4-acre, tree-lined park is on the southern tip of Roosevelt Island in the East River with spectacular views of Manhattan and the UN.

At the opening ceremony, former President Bill Clinton said Roosevelt’s dream for a better world “is still the right dream for America.”

It was New York Governor Nelson Rockefeller and Mayor John Lindsay who first announced plans to build the memorial in 1973 and appointed Louis I. Kahn as its architect.  Kahn completed the plans for the park’s sleek, minimalist design before he died suddenly in 1974. The city, on the brink of bankruptcy, shelved the plans.

Plans were revived by former Ambassador to the UN William vanden Heuvel in 2005 after an Oscar-nominated documentary about Kahn, “My Architect,” reawakened interest in the project. More than $53 million was raised from private donors, the city and state. A legal dispute with two major donors over how prominently their names would be displayed at the memorial had threatened to further delay the park’s debut. 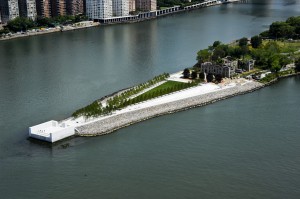 The park is Kahn’s only work in New York City and is the only memorial to Franklin Roosevelt in his native New York State. Fundraising continues to transform a crumbling, abandoned 19th-century smallpox hospital on the island into the park’s visitor center.

Joseph L. Plaud, advisor to the National New Deal Preservation Association, attended the opening ceremony. “There is nothing more special than an event mainly populated by unreconstructed New Dealers, like myself,” he said. “The speeches by President Clinton and Governor Andrew Cuomo, and the closing speech by Bill vanden Heuvel, renewed our faith in what progressive government can do for the American people, even in our fractious political age…”

The park opened to the public on October 24.