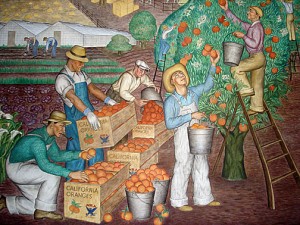 The long-awaited restoration of twenty-seven New Deal murals at San Francisco’s Coit Tower is complete. The tower re-opened to the public with a ribbon-cutting ceremony on May 14.

The murals were painted in 1934 under the auspices of the Public Works of Art Project, the first New Deal employment program for artists.  They depict scenes of California in the 1930s. The Living New Deal’s Advisor Harvey Smith wrote the tower’s new signage interpreting the murals and the tumultuous times that inspired them. 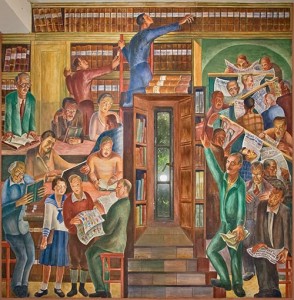 Age and neglect had taken a toll on both the tower and its artworks. Local activists pushed a successful ballot initiative to require the city to dedicate funds to restore and protect the landmark and murals. The tower closed in October 2013 for the $1.3 million upgrade.

Coit Tower, named for Lillie Hitchcock Coit, a colorful local character, was built in 1933. With 360-degree views of the city and the bay, the tower is one of San Francisco’s most visited landmarks.