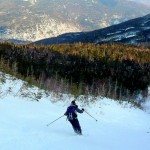 New York Times reporter Jonathan Mingle describes his ski adventure down CCC trails in the Northeast. From the Times:

“The Thunderbolt is one of more than a dozen semi-hidden gems tucked throughout the hills of New England, the legacy of a trail-cutting frenzy conducted in the 1930s by the Civilian Conservation Corps, a signature program of President Franklin D. Roosevelt’s New Deal.

…The program also helped catalyze the nascent ski industry in the United States. Many New England ski resorts were built around trails first cut by the C.C.C. “In the scope of what the C.C.C. did, it was a real drop in the bucket,” said Jeff Leich, director of the New England Ski Museum. “And yet you think about Cannon, Wildcat, Stowe and what that’s meant for the economy of the region.” The winter tourism industry they helped spawn remains an important source of revenue throughout Vermont, New Hampshire and the Berkshires.”