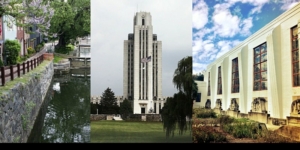 The Living New Deal has published a map showing the immense contribution of the New Deal to Washington DC. A large-format map that folds to pocket size, it locates over 500 New Deal public works sites around the District of Columbia and highlights 34 notable sites, with descriptions on the back.

The nation’s capital was transformed by the Roosevelt Administration in one decade, 1933-42. The New Deal completed the Federal Triangle and Capital Parks, renovated the National Mall and Washington Monument, and constructed major buildings and monuments, like the Department of Interior and Jefferson Memorial. It helped rebuild the city’s basic infrastructure of water, sewers, streets and bridges, and added numerous recreation, school and health facilities. And it enhanced the city with hundreds of artworks.

The New Deal was busy beyond the District, as well, and the map highlights 10 such sites, including the National Institutes of Health, Beltsville Agricultural Research Station, National Airport, The Pentagon and, of course, Greenbelt MD. Many more sites across Greater Washington can be found on the Living New Deal’s online map at livingnewdeal.org.

As Living New Deal founder, Dr. Gray Brechin, says, “The New Deal’s work of building, renovating and modernizing Washington DC is largely unmarked and unrecognized, as in most of the country. It’s like finding a lost civilization that has been buried and forgotten.”