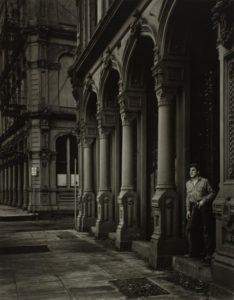 From the Architectural Heritage Center in Portland, Oregon:

Minor White (1908–1976) was one of the most important American photographers of the 20th century. Originally from Minnesota, White’s professional career as a photographer began in Portland. Between 1938–1942 White was commissioned to document what amounted to the end of an era for some of the city’s most important early architecture. Downtown commercial buildings along and near Front Avenue (now Naito Parkway) were soon to be demolished, while not far away, some of the city’s most opulent 19th-century mansions were also targets of the wrecking ball. Working first with the New Deal-sponsored Oregon Art Project, and later the Portland Art Museum, the images White captured of grand-yet-dilapidated Portland buildings are both beautiful and haunting. They highlight the amazing craftsmanship and artistic merit of architecture from an era that was by that time, considered out of vogue and long past its prime.

The Bosco-Milligan Foundation, in partnership with the Portland Art Museum and the Oregon Historical Society, presents this new exhibit that will, for the first time, combine the photography of Minor White with building artifacts from our collections. Included in the display are artifacts from the Richard B. Knapp House (1882) and the Kamm Block (1884), both of which were photographed in detail by White.

Parting Shots will bring greater focus and attention to White’s career in Portland, while also presenting through physical artifacts, the fine workmanship and materials employed by 19th-century architects and builders. White’s work also prompts us to think about how we should document historic buildings today, especially those at risk of demolition, and the power of the photograph in depicting our architectural heritage.

The Architectural Heritage Center will hold an Opening Reception on Thursday, March 16th, from 6:00 pm–8:00 pm. Please contact the AHC for more info.