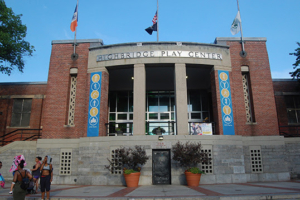 RSVP
A link to the webinar will be provided upon registering.

From pools in New York City to lakes and forest roads in Bear Mountain, the New Deal built a network of parks and recreation facilities that still enriches life in the New York metropolitan area. Nevertheless, maintaining and extending this inheritance has meant confronting both racial discrimination and budget cuts.

Join us as we explore the New Deal’s legacy for our region’s parks, from their complex origins in private money and New Deal public works to contemporary efforts to build parks for communities that lack green space.

Biographies
Marta Gutman, a historian and licensed architect, teaches architectural and urban history at the Spitzer School of Architecture at the City College of New York and at The Graduate Center/CUNY. She is the author of the prize-winning book A City for Children: Women, Architecture, and the Charitable Landscapes of Oakland, 1850–1950. Her current book project is Just Space: Modern Architecture, Public Education, and School Desegregation in Postwar Urban America. Prof. Gutman, a founding editor of PLATFORM, the online forum for conversations about buildings, spaces, and landscapes, is the president-elect of the Society for American City and Regional Planning History.

Rose Harvey, Senior Fellow, Parks & Open Space, leads New City Parks, a program at Regional Plan Association to create and revitalize parks in neighborhoods that lack  green spaces. Before joining RPA as Commissioner of the Office of New York State Parks, Recreation and Historic Preservation, she oversaw the revitalization, creation, and operations of more than 250 parks and historic sites and helped create and execute Gov. Andrew Cuomo’s $1 billion “Parks 2020” capital improvement program to rejuvenate and transform the New York State Parks system. At The Trust for Public Land, she helped establish over $1 billion of new parks, 300 of which are urban gardens and playgrounds in underserved neighborhoods. Rose holds a B.A. from Colorado College and an M.E.S. from the Yale School of Forestry and Environmental Studies (FES).

Robert W. Snyder, Manhattan borough historian, is professor emeritus of American Studies and journalism at Rutgers University-Newark. He is the co-author of All the Nations Under Heaven: Immigrants, Migrants and the Making of New York and the author of Crossing Broadway: Washington Heights and the Promise of New York. He is a member of the New York Academy of History and was a Fulbright lecturer in American Studies in South Korea.  When he is not working as a historian, he hikes, paddles and skis in New York State parks.