You’re Invited
Health of a Nation:
Past Inspirations, Recent Lessons
and Equitable Planning for the Future 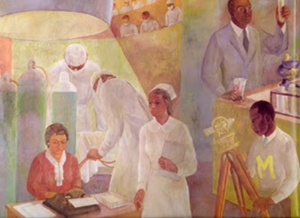 Among its many achievements, the New Deal devoted significant resources to improving public health. To explore this forgotten history and to address the public health challenges we face today, the Living New Deal NYC invites you to join us for a webinar on Monday, February 8, at 8:00pm EST. Please click here to register. You’ll receive a confirmation and a link to the live Facebook event. Audience participation will be crucial to the webinar’s success, so please feel free to submit your questions in advance.

Introduction:
Deborah Gardner is Historian & Curator for Hunter College’s Roosevelt House, where she has produced numerous exhibitions. She has served on the NYC Landmarks Preservation Commission and is a member of several preservation groups, including the Living New Deal. She has authored articles and books on many topics, including the history of the Roosevelts in New York.

Keynote Speaker:
Sandro Galea, MD, MPH, DrPH—a physician, epidemiologist, and author—is dean and Robert A. Knox Professor at Boston University’s School of Public Health. He previously held academic and leadership positions at Columbia University, the University of Michigan, and the New York Academy of Medicine. He has published extensively in the peer-reviewed literature and is a regular contributor to a range of public media regarding the social dimensions of health, mental health, and the consequences of trauma. He has been listed as one of the most widely cited scholars in the social sciences. Galea holds a medical degree from the University of Toronto, graduate degrees from Harvard University and Columbia University, and an honorary doctorate from the University of Glasgow.

Panelists:
Carmelita Blake, EdD, MPH, RN, is a nurse, hospital administrator, and recently retired clinical associate professor at NYU’s School of Continuing and Professional Studies. She is an officer of the Public Health Association of New York City and a member of the steering committee of the Metro New York Health Care for All Campaign. Currently working as a healthcare management education consultant, Dr. Blake thinks and acts at the Intersection of public health, nursing, and meeting the health needs of underserved populations.

Donald Moore, MD, MPH, earned his medical degree from the Yale School of Medicine and his Master of Public Health in Hospital Administration from the Yale School of Public Health. He completed a residency in general surgery at Mount Sinai Medical Center in New York City and is Board Certified in emergency medicine. He is currently Clinical Assistant Professor at the Weill Medical College of Cornell University and at SUNY Downstate Medical Center. He is an Attending Physician at New York-Presbyterian Brooklyn Methodist Hospital and has had a primary care medical practice in Brooklyn, New York for more than 30 years. Dr. Moore is President of Provident Clinical Society (the Brooklyn affiliate of the National Medical Association, which is the largest and oldest national organization representing African American physicians and their patients in the United States), and is a board member of Physicians for a National Health Program–NY Metro Chapter.

Moderator:
Peggy Crane, director, the Living New Deal NYC, is a writer, editor, and strategic communicator with 20 years’ experience promoting the goals and agendas of diverse organizations, including NYU Medical Center, the New York Academy of Sciences, the Crohn’s & Colitis Foundation, the National Eczema Association, and the Cornell School of Industrial and Labor Relations, among many others. Her work has appeared in the Los Angeles Times, The Scientist, and on numerous health and education websites. During the mid-1970s, Peggy moved to New York from her native Washington, D.C. to pursue a musical career. Through the late 1980s, she sang professionally as both a choral singer and as a soloist. She earned her B.A. in liberal studies at the New School for Social Research, with a year of graduate study in global health at the University of Copenhagen. She is a member of the National Association of Science Writers and Science Writers in New York.