Seventy-five years later, an essential New Deal program remains essential. From the Huffington Post today comes this analysis from Peter Dreier (author of The 100 Greatest Americans:  A Social Justice Hall of Fame, which we reviewed this winter) and Donald Cohen (chair of In the Public Interest):

“Business groups and their political allies have consistently attacked the idea of a minimum wage ever since President Franklin D. Roosevelt proposed it during the Depression to help stimulate the economy. And today — the 75th anniversary of the Fair Labor Standards Act (FLSA), which FDR signed on June 25, 1938 to establish the minimum wage as well as the 8-hour day, paid overtime and child labor protections — their contemporary counterparts are still at it. 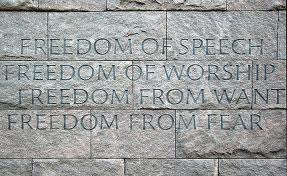 Four Freedoms engraving
The FDR memorial in Washington DC elucidates “Four Freedoms,” towards which society should aspire, as articulated by FDR. Among them is “freedom from want,” a dream which FDR sought to achieve through policies like the minimum wage.

A recent report by the National Employment Law Project and the Cry Wolf Project, Consider the Source: 100 years of Broken Record Opposition to the Minimum Wage, chronicles the history of unchanging sky-is-falling rhetoric by business interests opposed to minimum wage laws.

Even today, business groups and their political allies still complain that the minimum wage violates employers’ freedom to set pay levels, forces business firms to cut jobs or even file for bankruptcy, and destroys employees’ drive to work hard. The fact that there is no evidence for these statements hasn’t stopped them from making whining about the minimum wage. But after 75 years of success, we should no longer take their complaints seriously. They are just crying wolf.

In 1937, soon after FDR first floated the idea of a federal minimum wage, the National Association of Manufacturers (NAM) warned that it “constitutes a step in the direction of communism, bolshevism, fascism, and Nazism.” Congressman Edward Cox, a Georgia Democrat, said that the law “will destroy small industry.” These ideas, Cox claimed, “are the product of those whose thinking is rooted in an alien philosophy and who are bent upon the destruction of our whole constitutional system and the setting up of a Red Labor communistic despotism upon the ruins of our Christian civilization.” Roosevelt and most members of Congress ignored these warnings and adopted the FLSA, which established a minimum wage of 25 cents an hour.

Since then, …” Read the rest of this article here.