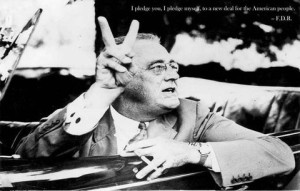 2 comments on “Did the New Deal Cure the Great Depression?”