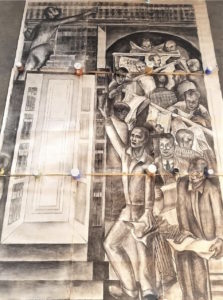 Bernard Zakheim’s family has recently discovered the original, 10 feet high charcoal sketch drawings for his mural, The Library, located at the Coit Tower in San Francisco. Painted by Zakheim in 1934, the mural became the center of political controversy. Several of his works show figures representing people in the artist’s social circle. The Coit Tower mural is no exception, showing artist Ralph Stackpole and sculptor Beniamino Bufano. Zakheim’s friend John Langley Howard is depicted reaching for Marx’s Das Kapital. This spurred debate in the press at the time about the propagandistic messages in Zakheim’s art, and accusations concerning his Communist sympathies. You can see the Living New Deal’s page on Zakheim’s Coit Tower mural here. The Visual Transformation Gallery located in Oakland is seeking to organize a public showing of the recently discovered charcoal drawings.