Dancing That Others May Walk 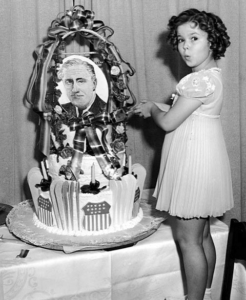 As president, FDR used his birthday, January 30, to advance his most important cause—raising awareness and money to eliminate polio, a disease FDR knew first hand. In 1934, more than four thousand communities across the nation came together at 600 celebrations for what would become an annual “Birthday Ball.” They raised millions of dollars for the Warm Springs Foundation, a charity FDR founded in response to the scourge. He later chaired the March of Dimes.
Many today seem to have forgotten that such efforts led to breakthrough vaccines that eradicated polio throughout much of the world. Roosevelt likened the fight against polio to war. “It strikes with its most frequent and devastating force. And that is why much of the future strength of America depends upon the success that we achieve in combating this disease.”