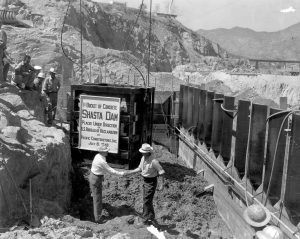 Amidst Trump’s call to spend $1 trillion on infrastructure and the American Society of Civil Engineers’ recent Report Card for America’s Infrastructure (our GPA is a sad D+), Marketplace’s Sarah Gardner visited Shasta Lake, California, to get a sense of what large-scale projects once looked like for the people who built them, for their families, and for the folks who live in their shadows and benefit from them today. Indeed, Shasta Dam, a massive Bureau of Reclamation/Public Works Administration project, employed around 13,000-15,000 workers during the seven years (1938-1945) it took to build, fostered a boom town around it, and is today “a key part of California’s complex plumbing system” and central to its status as “an agricultural powerhouse.” We hear from New Deal scholars and from some of the “dam kids” (children of workers, as they were colloquially known) about the dam and life during the Great Depression and New Deal.

In terms of infrastructural benefits, employment opportunities, and the spirit of hard work and civic mindedness it fostered, Shasta Dam is a prime example of the positive legacies of the New Deal. But what would a massive public works program look like today, amidst changed circumstances? As economist Edward Glaeser notes in Gardner’s piece, “Much of infrastructure today is quite technologically intensive. It involves a lot of machines relative to the level of unskilled labor, and thinking that you’re just going to hop readily from one industry to another seems like a mistake.” Living New Deal Director Richard A Walker wades into the debate while further suggesting a crucial difference between then and now: “Why don’t we insulate every house and apartment in America? Think of the people we could put to work upgrading houses in every city, every town, every rural area to help with energy conservation. Those are not exotic, sophisticated projects.” Jason Scott Smith, a Living New Deal Research Board member and professor of History at the University of New Mexico, is also interviewed and notes that the New Deal sought to build “‘socially useful’ infrastructure.” In 2017, we need to also imagine what socially responsible infrastructure looks like.