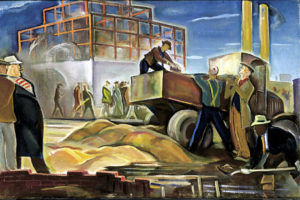 When I work on my blog, “New Deal of the Day,” I sometimes use New Deal artwork images available on the website of the Smithsonian American Art Museum. Recently, I came across two paintings by Dacre F. Boulton. The first, “Winter,” is a great image for the frigid weather we’re currently experiencing in my home base, West Virginia. The second, “Industrial,” seems to be a powerful representation of the New Deal’s emphasis on work and infrastructure. And, interestingly, it shows an African American worker alongside white workers, perhaps indicating that the artist was well aware of the New Deal’s desire to extend job and relief opportunities to minorities – an effort which facilitated many integrated work sites across the country.

I couldn’t find much about Dacre Boulton on the Internet. The Smithsonian offers some information; for example, that he worked in the Public Works of Art Project (PWAP). But it also notes: “Little is known about the artist Dacre F. Boulton.” With a little more research however, I was able to locate his son, Dr. D’Arcy Jonathan Dacre Boulton, Professor Emeritus of History at the University of Notre Dame, Indiana. Dr. Boulton was kind enough to share some information about his father and his family, and what follows comes from his responses to several questions that I sent him in December 2016.

Dacre Fiennes Boulton was born on February 23, 1906, in Russell, Manitoba (Canada) to D’Arcy Boulton IV and Georgina Boswell Barrett-Lennard. Young Dacre was born into a family of farmers, but also lawyers, politicians, and military officers. But he bucked the family tradition and pursued his interest in art. With his father’s support, not long after completing his general education at a boarding school in Winnipeg in 1924, Dacre began his studies of art at Washington University in St. Louis, and went on to complete them at the Pennsylvania Academy of Fine Arts in Philadelphia around 1928. Unfortunately for Boulton, graduation coincided with the first years of one of the worst economic catastrophes in world history – the Great Depression. 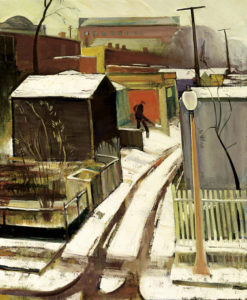 During his studies, Boulton had been financially aided by scholarships (which also allowed him to visit museums in Europe); but after graduation from the Academy he must have had some difficulty finding a job that would pay him enough money to be self-sufficient. This was a problem shared by thousands of artists across the country. So, responding to the crisis, federal policymakers created the Public Works of Art Project (PWAP), the first of several New Deal programs devoted solely to the arts. The PWAP “was set up under the Treasury Department for supervision, as one of the agencies to extend relief to the professional class, its object being to employ artists who were unemployed in the decoration of public buildings and parks” (Final Report of the PWAP, 1934, p. 1).

For Boulton, the PWAP must have been a godsend, and perhaps an unforeseen one, since it was “the first federal government program to support the arts nationally.” Indeed, shortly after the PWAP ended (and shortly before an even larger federal initiative would begin) Jacob Baker—a high-ranking official in the various New Deal work-relief agencies—wrote in the New York Times, “For the first time in our history, our government has become a patron of the arts, officially and quite unashamed” (“Work Relief: The Program Broadens,” November 11, 1934). Dacre Boulton’s son reflects, “I know that he depended entirely on the money he received from [the PWAP] after his graduation.” And he also recalls that his father “was very grateful to Roosevelt and his administration for establishing the [PWAP], and always spoke highly of the whole project” (email correspondence with Dr. D’Arcy Jonathan Dacre Boulton, December 2016).

Of course, the PWAP was not a one-way street. For a small investment of public funds (about $23 million in today’s dollars), the artists on the project created a great body of work: 3,749 artists produced 15,663 works of art, brightening up public places all across the country. Boulton created at least two of the artworks, the aforementioned “Winter” and “Industrial.” The former “was included in the 1934 exhibit of works created by PWAP artists held at the Corcoran Gallery of Art, in Washington, D.C.”

After the PWAP ended in May 1934, it would be nearly a year and a half before similar programs were created for artists who needed a helping hand: The Treasury Relief Art Project and the WPA’s much larger Federal Art Project, both created in late 1935. But it would be too long of a wait for Boulton, so he returned to Canada to put his talents into high gear. He subsequently enjoyed a very successful career as a commercial artist (at one point, his artwork could be seen in supermarkets all across Canada), and even worked as an artist in the Canadian Army during World War II.

As we know, New Deal policymakers and Congressional lawmakers sometimes showed hesitancy in creating and funding work-relief programs. This is part of the reason we see gaps in time between some New Deal programs, and rapid increases and decreases in employment in programs like the WPA. This hesitancy may have cost America a fine artist in Dacre F. Boulton.

Boulton died in Toronto, on May 26, 1984. He is remembered by his son as a generous and supportive father – two traits he inherited from his own father, D’Arcy Boulton IV. And perhaps, though we may never know for sure, his brief experience in the New Deal served to reinforce his already-existing tendencies towards service and generosity.

4 comments on “Dacre F. Boulton: The Rediscovery of a New Deal Artist”