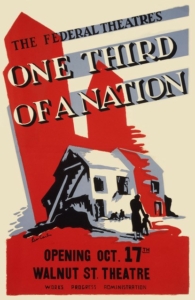 Congress funded the Federal Theatre Project primarily to provide jobs for unemployed theatre people during the Great Depression. But WPA administrator Harry Hopkins and the FTP’s dynamic director Hallie Flanagan had a much broader mission: to create a publicly funded national theater, accessible to all, that would both entertain and strengthen public dialogue and democracy. Documentary photographers working under Roy Stryker at the Farm Securities Administration were similarly driven, capturing on film the great inequality between the rich and the poor. Stirring the conscience of Americans then and still.