The fire sale of our post offices is accelerating while the media remain largely asleep at the wheel.

In July 2011, the U.S. Postal Service (USPS) gave an exclusive contract to liquidate the public’s property to the giant commercial real estate firm C.B. Richard Ellis (CBRE), which also advises the Postal Service on which properties to sell.  It’s no surprise, then, that so many of the post offices listed for sale or already sold happen to be in expensive real estate markets like Santa Monica, Venice, Palo Alto and Berkeley in California; Greenwich, Connecticut; Towson and Bethesda in Maryland; Northfield, Minnesota; and New York City.

CBRE is effectively owned and chaired by Senator Dianne Feinstein’s husband, billionaire private equity financier Richard Blum. If you visit the CBRE website devoted to marketing postal properties you will find no distinction between superb, historic post offices and blandly utilitarian processing facilities or vacant lots. For CBRE, it’s all simply real estate thrown into the same lucrative bin. A listing on the National Register of Historic Places and the presence of art works created during the New Deal only serve as impediments to moving those properties quickly. 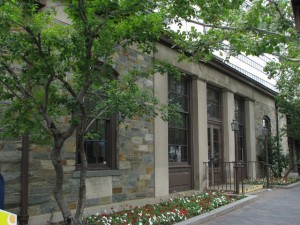 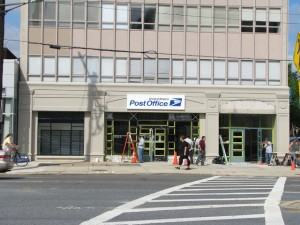 These relocations mean the USPS will be paying millions of dollars in rent from which it is exempt in buildings it now owns. Further, it means trading ennobling public spaces for outlets in strip malls and Walmarts devoid of the aesthetic or historical merit in which the USPS once took pride.

The fire sale of the public’s portfolio is largely the result of legislation Congress passed in 2006 to effectively put the Postal Service out of business by requiring that it prepay billions to cover health benefits for its future employees—payments that no other government agency or business is required to make. For more than a year, the Postal Service has been seeking legislation that would allow it to reduce the $5 billion annually it must pay the U.S. Treasury, but Congress has failed to act. In September, Postmaster General Patrick R. Donahoe warned that the Postal Service could be insolvent within the year. “Absolutely, we would be profitable right now,” he told The Associated Press, when asked whether congressional delays were to blame for much of the postal losses, expected to reach a record $15 billion this year.

To staunch the bleeding, some 3,700 post office properties are being studied for possible sale—often without public review or input. Attorneys for the National Trust for Historic Preservation in a lengthy letter to the USPS enumerated the many preservation and environmental laws that the agency appears to be ignoring in Berkeley and elsewhere. On October 22 a USPS representative curtly responded that the Trust’s request to be a consulting party was premature and its allegations were “not correct.”

In 1935, Stephen Voorhees, the president of the American Institute of Architects, wrote that the profession’s job was to “hold up before the people a high standard of excellence both in design and craftsmanship, utilizing for this purpose every aesthetic and technical resource of the nation, so that every citizen may have the opportunity of becoming familiar with good architecture, good painting and good sculpture.” 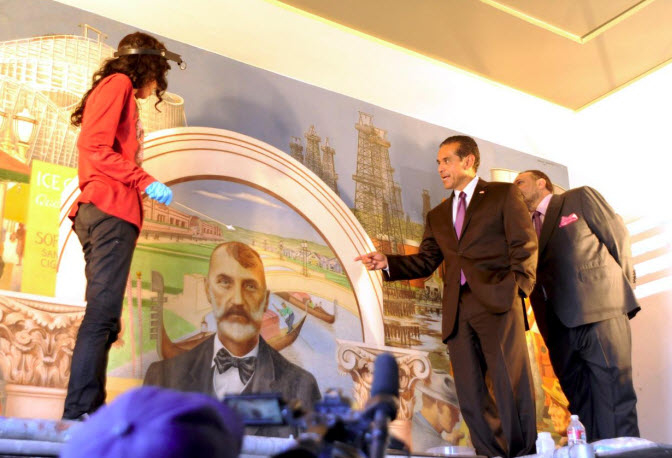 Edward Biberman's Venice Post Office Mural
Despite community opposition, the USPS sold the Venice Post Office at 1601 Main Street to Hollywood producer Joel Silver. At a press conference closed to the public, Los Angeles Mayor Antonio Villaraigosa and the L.A. Conservancy lauded Silver, the producer of the Die Hard and Lethal Weapon action films, for re-purposing the building for his film company. Silver is now seeking exclusive rights to the post office lobby mural, “Story of Venice,” completed in 1941 by Edward Biberman. Biberman, who died in 1986, was himself a champion of public murals. The Coalition to Save the Venice Post Office is fighting for public access to the mural.

America’s historic post offices are unique in their variety and quality as well as in the public art that make them the People’s Art Gallery. Without the magnificent post offices built during the New Deal and before, Voorhees said, “there would be a distinct loss to the spiritual and patriotic relationship between the citizen and the government if its activities were carried on in bare warehouses without architectural significance or dignity and constructed as cheaply and as shoddily as the average speculative structure.”

The sell off and relocation of the post offices is the nightmare that Voorhees foresaw. Perhaps it is precisely to break that relationship between the citizen and government that our post offices are now regarded not as our shared legacy, but simply as surplus real estate to be liquidated.

For more on the loss of America’s post offices, why it is happening, and what you can do, visit https://www.savethepostoffice.com/