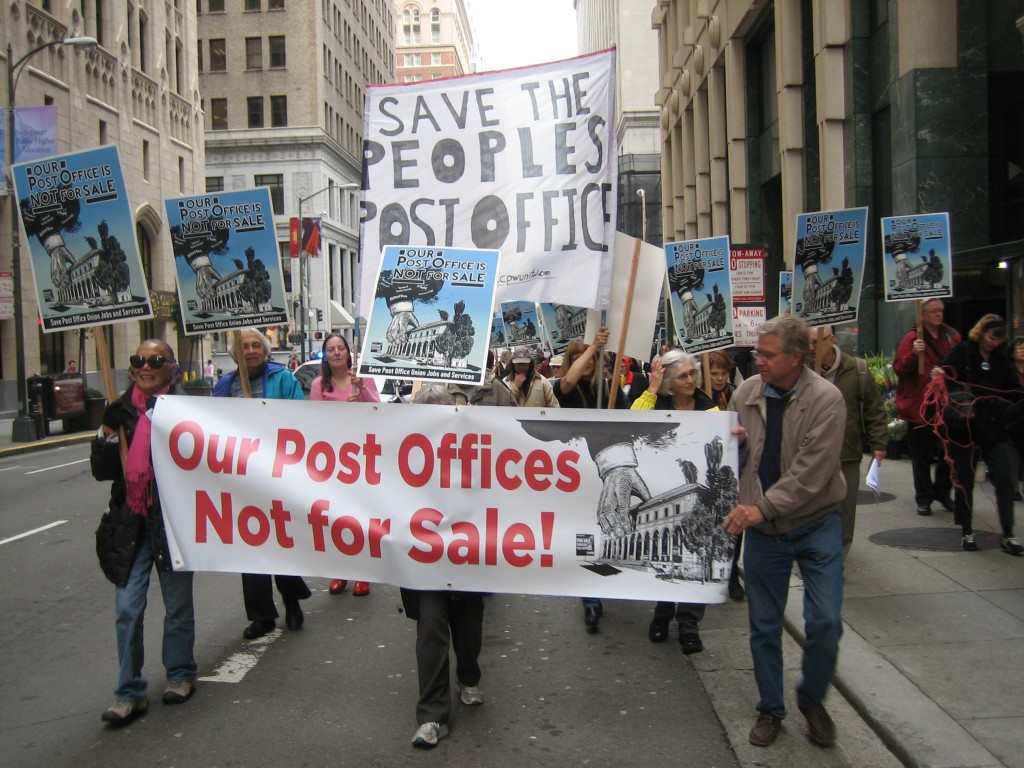 For years, conservative think tanks have pushed privatization schemes and Republicans in Congress have followed along. In 2006 Congress approved a bill requiring the U.S. Postal Service to prepay 75 years of postal workers benefits within a 10-year period. No other public or private enterprise is subject to this onerous requirement. Unable to come up with the billions of dollars it needs, the USPS is downsizing, potentially closing up to 15,000 post offices and distribution centers. See the map of post office closures. 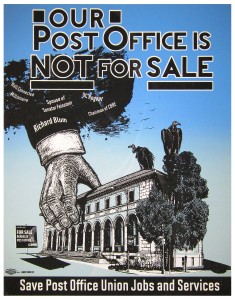 Congress has yet to act to address this manufactured crisis. Meanwhile, communities nationwide are taking action to stave off a fire sale of post office properties, many of which are historic buildings, some housing New Deal art. In California, citizens in La Jolla, Palo Alto, and Redlands are working to save their post offices. In Berkeley, activists are working hand-in-hand with the city council to prevent the proposed sale of the downtown post office, which was built in 1914 and contains two New Deal artworks. In Martinez, locals are seeking protection for their post office and its Western-themed New Deal mural by Maynard Dixon by nominating it to National Register of Historic Places. In La Jolla, preservationists are seeking protection for their 77-year-old post office, an effort that has been endorsed by the California State Office of Historic Preservation.  In Santa Monica, Congressman Henry Waxman, the Santa Monica Conservancy, and local residents have fought the sale of the downtown post office. Historic post offices in Ukiah and Venice, California were recently lost; the Venice post office was sold to a movie mogul for his private offices. 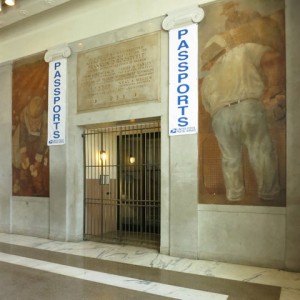 In New York, officials in Northport, Long Island, heard testimony from community members and postal union workers opposed to the closure of their post office. Also slated for sale is the massive Bronx Post Office. The borough president has questioned the methodology the USPS used in selecting it for sale. According to The New York Times, there is no plan to protect its thirteen New Deal murals by Ben Shahn and Bernarda Bryson, but citizens in New York and New Jersey are mobilizing to save the murals.

There’s more: In Northfield, Minnesota, citizens formed the Save Our Post Office Task Force. In Maryland, the governor called on state lawmakers to purchase the Annapolis Post Office. The city of Boone, North Carolina purchased its post office several years ago, leasing it back to the postal service. But it, too, is now slated to close.

In South Carolina, the mayor of Cheraw called a special meeting to rally support for the town’s post office. On the other side of the country, the local historical society in Eugene, Oregon is considering buying the downtown post office for a museum.

To learn more go to https://www.savethepostoffice.org

A National Day of Action will be held Sunday, March 24, to mobilize public support for the post office and to preserve Saturday delivery service. Learn More