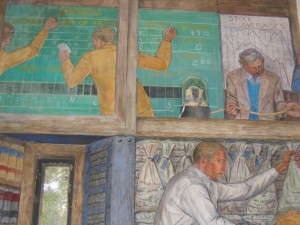 The New Deal’s first public murals, in San Francisco’s famous Coit Tower, are much in need of attention after 75 years of wear and tear.  Efforts are just getting underway to do the necessary restoration work.

A full account appeared in the Los Angeles Times on January 3d, 2012, followed by a report on the PBS NewsHour  on January 18th, a KQED Arts article by Spencer Michaels, January 15th, and a news item in the Huffington Post-San Francisco on January 19.

Unfortunately, there are lesser known New Deal artworks in San Francisco in far worse shape than those in Coit Tower. -GB      Listen to Gray Brechin discussing the Coit Tower murals on KQED-FM’s Forum.