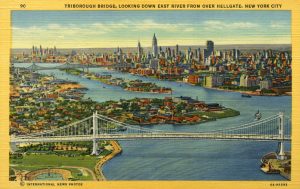 In May, The Living New Deal will host events to celebrate our new map—and New Deal New York at large.

On Thursday, May 11, at the Roosevelt House at Hunter College, William Leuchtenburg, Marta Gutman, and Ira Katznelson will participate in the panel, “New Deal New York: A Living Legacy,” moderated by Owen Gutfreund. Following this, Living New Deal Director Richard A Walker will introduce our map. The panel begins at 6 pm, with a reception and map sales and signings to follow. RSVP here.

On Thursday, May 18, at the Museum of the City of New York, Mason Williams and Living New Deal founder Gray Brechin will participate in the panel, “Revisiting New York’s New Deal,” to be moderated by Sarah Seidman. The Museum will also open its gallery to visitors to see its exhibit, “Activist New York.” The panel begins at 6:30 pm, with a reception and map sales and signings to follow. RSVP here. Tickets are $10 with discount code “LND.”

Meanwhile, you can purchase the map ($6) and a poster version ($10) through our site.