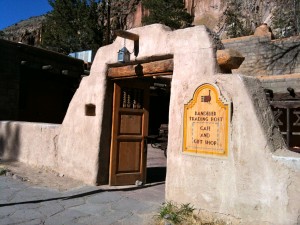 When Unit 815 of the Civilian Conservation Corps arrived at the edge of a steep canyon north of Santa Fe, New Mexico in 1933, the only way in was by foot or horseback via a mile-long switchback trail. Back then, George and Evelyn Frey and their son Richard were Frijoles Canyon’s only residents. The Frey’s ran a small lodge serving intrepid visitors to the nearby cliff dwellings that native people had occupied for centuries.
Over the next eight years, the CCC would build thirty-one Pueblo Revival-style structures for the Bandelier National Monument—the largest collection of CCC buildings at any national park. 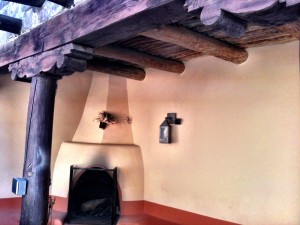 To make the park more welcoming, the CCC Boys’ first project was to build a 3-mile road into the canyon. The construction of the visitor center, guest cabins, campground, retaining walls, water fountains, park service residences and offices, fire tower, and entrance station would follow. 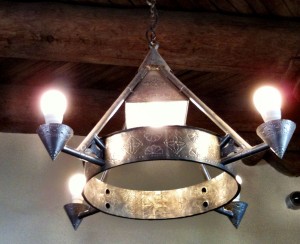 The buildings, designed by Park Service architect Lyle Bennett, are of local stone—Bandelier rhyolite tuff— and are built around a central plaza to harmonize with the landscape and culture. The visitor center reflects traditional New Mexican style—a corner fireplace, carved wooden support beams called vigas, and latillas—saplings placed in a herringbone pattern on the ceiling—and are testimony to the skills the young men learned on the job. The Spanish Colonial tin chandeliers and wall sconces they created are still in use. 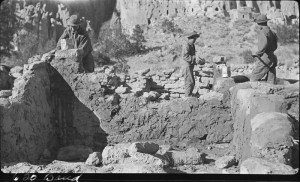 The Boys also crafted wooden bed frames, desks, dressers, chairs, stools, benches, wood boxes, and tin mirrors for the cabins, which closed in 1976. The portal, a long, covered porch, is still used for demonstrations of Pueblo Indian arts and crafts.
The CCC camp at Bandelier—one of more than 2,600 across the country—was bulldozed in 1941 immediately after its occupants left. But their imprint on the park will endure.

In 1987 the National Park Service designated the Bandelier CCC Historic District, which ensures preservation of these unique and beautiful structures and the legacy of the men who built them.