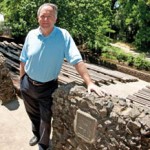 On the banks of Big Chico Creek, where the university campus meets Children’s Playground and Bidwell Mansion, lies one of Chico’s most striking, and least recognized, architectural and historic treasures: Bidwell Bowl Amphitheater.

The amphitheater is wrought from local stone and incorporates the creek itself into its structure. Moss and lichen settled on old stone walls add to its grandeur, only partly diminished by intermittent broken wood seating planks, graffiti scribbles and a bite-shaped chunk missing from the main wall.

More people pass by than stop to appreciate the amphitheater, and most who do use it—students seeking quiet study space, older children escaping eyes of parents and police—couldn’t tell you anything about it, even its official name.

But, to those who know its meaning, a humble, inconspicuous plaque reading “ERECTED 1938 WPA” speaks volumes about who built it, for whom it was built, and why it is here.

Michael Magliari, a history professor at Chico State, met this reporter at the site one recent morning to talk about the Bidwell Bowl and the era that birthed it—the Great Depression. The conversation, though rooted in events that occurred at least 70 years ago, couldn’t have been more timely or telling in its relationship to modern politics.

“There’s a lot of lessons we learned from the Depression,” Magliari said at one point, shaking his head, “that have been completely forgotten. Or, at best they’ve been half-heartedly applied.”

These lessons, much like the buildings erected for the people, by the people, and the services that employed, fed, clothed, housed, entertained and educated millions during a dark hour in our nation’s history, need to be remembered, lest they disappear forever. And they are especially relevant today, as we struggle through another difficult economic era…