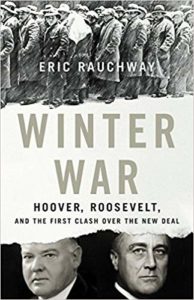 Eric Rauchway opens his new book Winter War with the near-miss assassination of President-elect Franklin Roosevelt on February 15, 1933, less than three weeks before his inauguration. If the bullet had found its mark, the U.S. would have had President John Garner, no New Deal, and very likely a total economic collapse, with the added bonus of Nazi domination of Europe and beyond.

Roosevelt reluctantly accepted the conservative Texan Garner as his running mate in exchange for the support of media magnate William Randolph Hearst who soon came to call Roosevelt’s administration “more Communist than the Communists themselves,” his ire raised by New Deal policies but, above all, by progressive taxation that put a crimp in Hearst’s castle building and shopping for art to fill it.

But that dramatic scenario is only one of many that Rauchway adroitly marshals to propel the reader through the crucial winter months between Roosevelt’s electoral victory and inauguration. During that time, the diametrically opposed positions of outgoing President Hoover and the incoming Roosevelt administration engendered not only a polar vortex between the two men, but an enduring ideological divide in the country about the proper role of government.

“The central idea [Hoover] crafted in the campaign,” Rauchway observes, “that the New Deal was no mere error, but a dangerously alien program engrafted onto the American political system that would, if indulged, destroy and supplant its host — became… a conservative article of faith and an abiding Republican principle.”

When Roosevelt insisted as he accepted his party’s re-nomination in 1936 that “Better the occasional faults of a government that lives in a spirit of charity than the consistent omissions of a government frozen in the ice of its own indifference,” he not only was invoking the primary Christian virtue but also, no doubt, jabbing his predecessor. The Quaker-born Hoover, after all, clung throughout his life to his zealous belief that the market must be allowed to correct itself without government interference despite the excruciating pain that would inflict upon millions, and despite every indication that it was doing just the opposite as his tenure came to a close.

Two days before Roosevelt’s near-assassination, President Hoover delivered a speech to Republican Party leaders at New York’s swank Waldorf Astoria Hotel. He meant to quell fears as a bank panic spread throughout the nation, but unknown to most, Hoover had instructed a close friend to withdraw $10,000 of his own money just before the dinner.

Perhaps unknown to Rauchway, rogue aristocrat and New Dealer Cornelius Vanderbilt IV recounted in his memoir, Farewell to Fifth Avenue, how, on October 4, 1931, Hoover and his two immensely wealthy Treasury Secretaries, Andrew Mellon and Ogden Mills, privately tipped off others of their own class to the gravity of the situation so that they could discretely move their fortunes abroad, thus worsening the depression for those not in the know.

Despite Hoover’s “early and consistent belief that the U.S. faced no greater threat than the New Deal”—including Adolf Hitler, Rauchway notes, —Roosevelt succeeded in displacing him. Weeks before FDR’S inauguration on March 4, 1933, Hoover privately warned FDR that only the president-elect could avert disaster by foreswearing the New Deal in favor of the Republican program. Roosevelt ignored his advice.