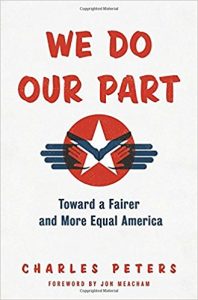 In We Do Our Part: Toward a Fairer and More Equal America, Charles Peters considers the tectonic social shifts he has seen in his lifetime–one that included attending Columbia on the GI Bill, serving in the West Virginia Legislature, working on JFK’s presidential campaign, helping found the Peace Corps, and serving as editor of the Washington Monthly. Peters never forgot what he terms the simple “neighborliness” he witnessed as a child of the New Deal, and seeks to understand both its source and its absence in America today.

The National Recovery Administration (NRA) a New Deal agency, was established in 1933 with the goal of eliminating “cut-throat competition” by bringing industry, labor and government together to create “fair practices” and stabilize pricing. Codes of conduct for almost every occupation carried into other aspects of society, kicking off a period of increasing social and economic equality and constant pressure for reform that Peters believes lasted from 1933 to 1965. “We Do Our Part” was the NRA’s motto.

Though the NRA was declared unconstitutional in 1935, it infused other New Deal agencies with a spirit of generosity and collaboration that also deeply marked the country. Peters’ book describes a cohesive America of shared values and purpose, and a president whose political sermonizing earned him the respect of Americans of all religions. It was a time when celebrities and government officials called themselves “common” and popular culture—especially film—ridiculed pretense and snobbery. This ramified into other aspects of society. Although it would be another 30 years before the advances of the Civil Rights Movement and Second Wave Feminism, FDR’s hiring of African Americans and women in his administration provided a model for multicultural leadership.

What changed? In a signal irony, Peters argues that in democratizing higher education, the GI Bill increased “snobbery” as elites doubled down on status-consciousness. The children of New Deal America went to the Ivy League in order to land jobs on Wall St. Washington became flooded with lobbyists seeking to “do well” instead of “good.” Meanwhile, race-baiting and anti-elitist Republicans swayed white-collar workers. We know the rest.

We Do Our Part prescribes a measured response: We need good people at all levels of government, but we also need “informed skepticism” with regard to power and politics and a willingness bridge the political divide. This assumes common ground that may not exist in the Trump Era.

Still, Peters has crafted an incisive narrative of how we got from there to here, and how we can reclaim common purpose, generosity, and respect by committing ourselves to bettering society not just our own social circles. At 91, with a clear memory of his youth, he “knows what the American people are capable of.”