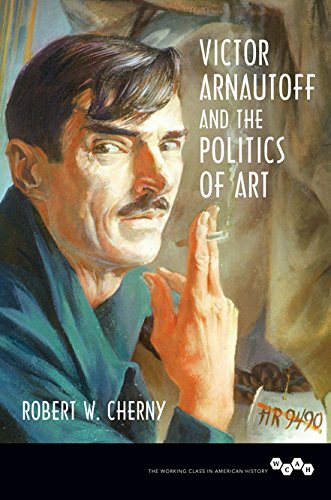 In a 1935 interview, The San Francisco Chronicle quoted New Deal artist Victor Arnautoff, who said, “As I see it, the artist is a critic of society.”

In a new biography of Arnautoff, (1896 –1979), Robert Cherny recounts the political events that shaped the artist’s life and found expression through his prodigious body of work.

Arnautoff’s story is cinematic—retreating across Siberia as a Russian cavalry officer in World War I; working for a Chinese warlord; assisting the Mexican muralist Diego Rivera; joining the Communist Party; teaching at Stanford University; testifying before the House Un-American Activities Committee; and ultimately returning to the Soviet Union where he remained a working artist until his death in 1979.

Arnautoff was part of San Francisco’s leftist art scene in the midst of the Great Depression. He found work with the Public Works of Art Project, supervising the 25 artists whose works cover the interior walls of the city’s landmark Coit Tower. Some of the murals were considered controversial for their depictions of striking workers, the haves, and the have-nots—a reflection of the political ferment that led to the General Strike that shut down the city in 1934.

Cherny also examines Arnautoff’s relationship with the famed muralist Diego Rivera. In 1929, Arnautoff apprenticed to Rivera for more than a year working on “The Conquest of Mexico,” the massive fresco at the National Palace in Mexico City. The masterpiece portrays the impact of European conquest on indigenous civilizations, a theme Arnautoff later reprised in frescos he painted for the Federal Art Project at San Francisco’s George Washington High School.

“The Life of Washington,” a series of 13 murals Arnautoff completed in 1937, depicts the school’s namesake as a slave owner and pointing pioneers westward over the dead body of a Native American. Detractors have recently called for the murals’ destruction, but Cherny asserts that Arnautoff meant the work as a rebuke of westward expansion and those who sponsored it.

Cherny provides insights into the artist’s intentions by quoting Arnautoff’s review of another highly controversial painting, Picasso’s “Guernica,” when it was displayed in San Francisco in 1939. “A work of art is always ‘propaganda’ because it always carries a message,” he wrote, urging the public to “Go, see, and participate.”

Cherny’s book examines a life shaped by politics. Arnautoff’s life and work were propelled by social and political forces, but he was never a bystander in turbulent times. Through his art, he became an active participant.

Harvey Smith is an advisor to the Living New Deal.