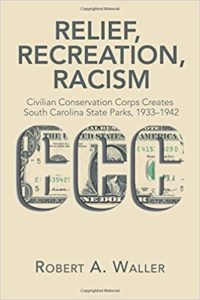 Professor Waller is clearly an enthusiast of the CCC and knowledgeable about its many legacies to South Carolina. His extensive study of the C’s national newsletter, Happy Days, as well as the rare newsletters published by each camp, makes him a congenial guide to how CCC camps functioned and how effective they were in healing damaged land while improving the physique and morale of the enlistees.

Many of the state’s early parks filled a need not only for recreation but also to attract tourists and preserve valuable watersheds. 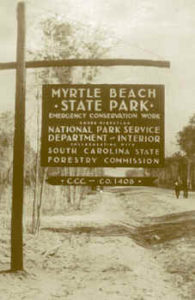 CCC Sign, Myrtle Beach State Park, South Carolina
A number of buildings built by the CCC are still in use at this park.
Photo Credit: Courtesy SCParks

While the CCC was largely responsible for constructing South Carolina’s state park system, the facilities within the CCC camps, Waller explains, were separate and very far from equal. As in other southern states, this extended to the kind of work and educational opportunities provided within segregated CCC camps.

Waller notes that the legislation authorizing the CCC in 1933 was amended by the only African-American member of Congress, Representative Oscar De Priest of Chicago, to racially integrate the Corps. This was fifteen years before President Truman de-segregated the Armed Forces. Integration of the CCC outside the South was widespread, if spotty, until halfway through the Corps’ existence when CCC Director Robert Fechner imposed segregation in camps across the nation. Archival photos document that fact. 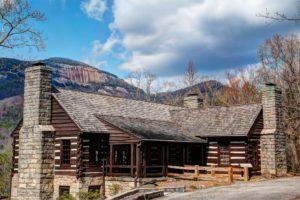 Table Rock State Park
Some of the finest examples of CCC craftsmanship in the state park system can be found at Table State Park.
Photo Credit: Courtesy SCParks

Waller’s book contains a wealth of information on the organization, activity, and legacy of the 99 CCC camps in the Palmetto State, but is also frustrating for its dearth of illustrations of the parks. He has assembled an invaluable bibliography of monographs on CCC work in other states, which made me realize not only how far we have come since Phoebe Cutler’s pioneering study of New Deal landscapes published in 1985, but also how much more work the Living New Deal has before it in mapping the C’s enormous legacy in the rural areas of the U.S. 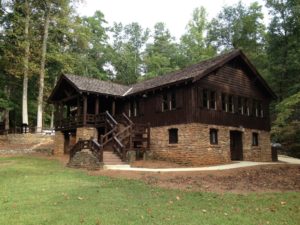 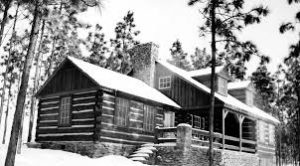