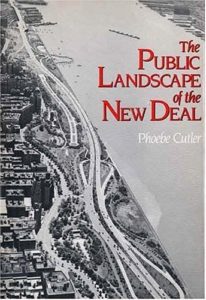 The Public Landscape of the New Deal
by Phoebe Cutler

I recently plucked a book off the shelf of my library and found the answer to a question I’m often asked: How did you discover the New Deal?

I first read Phoebe Cutler’s pioneering book The Public Landscape of the New Deal shortly after it was published more than thirty years ago. It suddenly made visible to me the continent-spanning matrix of creations that my parents’ generation built but neglected to mention because few were aware of what they had accomplished working their way out of the Great Depression.

Cutler’s own eyes were opened by the research she did for a Master’s thesis in Landscape Architecture at U.C. Berkeley. She opens by remarking, “Until now critical review of the New Deal has focused on the economic and political scene with brief digressions into literature, drama, and the graphic arts. Architecture has been slighted and landscape architecture other than town planning has been altogether ignored.”

Her book, she concludes, “will attempt to redress this oversight by demonstrating the pervasive and often powerful ways the Depression inscribed itself upon the landscape.”

Cutler’s book remains a revelation about how radically the New Deal transformed the American landscape. Her photos and commentary suggest that her research took her across the continent. Chapters focus on New Deal towns; parks ranging from the municipal to national level; the TVA; Midwest shelterbelts; soil conservation; the blunder of the invasive plant, kudzu; often uncritical dam-building; the revolution of public recreation; and the enormous stimulus the New Deal gave to the profession of landscape architecture.

Cutler’s book provides astute commentary about the design roots of New Deal landscapes stretching back centuries. Throughout she offers her own judgments about what worked and what didn’t and why.

Although the book is lavishly illustrated, largely with photographs Cutler took in her travels, these graphics are its chief weakness. Many have the quality of snapshots dully reproduced in black and white, while maps of complex and extensive landscapes such as Berkeley’s Tilden Regional Park are so small that they are almost impossible to read.

These shortcoming are, I suspect, due more to financial constraints imposed by Yale University Press at a time when Cutler’s subject was believed to be of interest only to a few. More recent books such as Roger Kennedy’s magisterial When Government Worked and Cynthia Brandimarte’s Texas State Parks and the CCC show the commitment of publishers today to making the vibrancy and ubiquity of New Deal landscape design known to a larger audience and worthy of destination tourism. Cutler, however, blazed the trail.