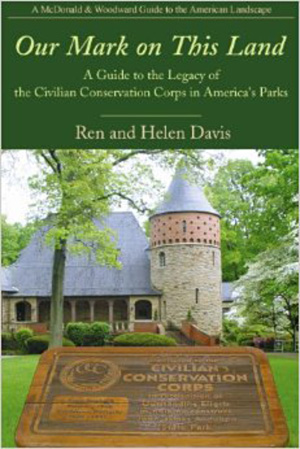 For anyone seeking out the finest examples of the New Deal, no road trip is complete without a copy of Our Mark on This Land. In the manner of the Federal Writers’ Project guides to the states, Helen and Ren Davis have compiled a superb illustrated guide to the extraordinary contributions made by the Civilian Conservation Corps to our national parks and forests and our state parks. Those public lands were vastly expanded during the Great Depression largely because of the labor provided by three million CCC “boys” as well as President Roosevelt’s lifelong commitment to conservation.

The book opens with a 55-page introduction to the CCC that is one of the finest summations of its origins, organization, philosophy, and accomplishments I’ve read. It introduces some of the key players including the designers of the “National Park-rustic”-style buildings featured in the book’s illustrations as well as the landscape architects who strove for an artful artlessness in the way roads, campgrounds, and lookouts were constructed.

The second section is a state-by-state guide to select parks, including maps, brief histories, and CCC-built features. “Destination parks” are provided for those seeking out the all-stars. The final section is an appendix of supporting information and an extensive bibliography about the CCC.

The book is generously illustrated with photos of parks and structures, many taken by the Davises. If the sixteen color plates whet your appetite for more of the same, I’d also recommend Cynthia Brandimarte and Angela Reed’s excellent Texas State Parks and the CCC: The Legacy of the Civilian Conservation Corps.

Our Mark on This Land is a work of love as well as scholarship. It will make you want to hit the road to seek out what the Davises found in their own travels. Don’t leave home without it.

Reviewed by: Gray Brechin, Ph.D. is Project Scholar for the Living New Deal.