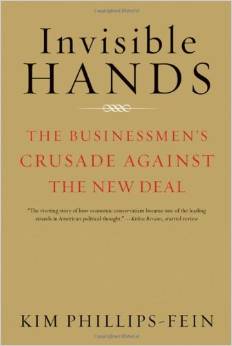 Most analysts of the conservative revolution begin with the aftermath of the failed Goldwater presidential campaign. Kim Phillips-Fein goes further back: to the reaction of some American businessmen to Franklin Roosevelt’s New Deal. If Invisible Hands’ subtitle leads you to expect significant information about New Deal politics, you will be disappointed. The New Deal is over by page 25.

What you will find is an otherwise very comprehensive account of the many and varied attempts to repeal the New Deal from the end of WWII up to and beyond Reagan’s election as president. Phillips-Fein gives us good descriptions of the ideas that fueled the conservative movement, the individual personalities that led it, and the rise of organizations like the Moral Rearmament and the American Enterprise Institute, and other like-minded advocacy groups.

The author covers a vast amount of ground and the narrative moves along briskly. She manages to show the many contradictions, schisms, tensions, and collisions among these groups as she maintains sight of their common themes and goals.

The enormous influence of economists Frederick von Hayek and Ludwick von Meis, and to a lesser extent, the writer Ayn Rand—icons of free-market ideology—is followed through the decades. What emerges from this amazing variety of competing and cooperating groups is the general opposition to government intervention on the grounds that, as Hayek pronounced, “submission to the impersonal and seemingly irrational forces of the market” is preferable to “submission to an equally uncontrollable and therefore arbitrary power of other men.”

A central New Deal discovery (and a point Phillips-Fein makes in her introduction and should have returned to in the conclusion) is that consumption is the key to both economic recovery and economic growth during a depression. This basic tenet continues to be sabotaged by Republicans’ persistent romance with supply side economics. Today, as during the Great Depression, such willful ignorance of the crucial role of demand undermines America’s economic recovery.

Reviewed by: Robert Leighninger is Professor Emeritus, Arizona State University and currently a Visiting Scholar at the University of California, Berkeley. He is the author of Long Range Public Investment: The Forgotten Legacy of the New Deal. He serves on the Research Board of the Living New Deal.

is Professor Emeritus, Arizona State University and currently a Visiting Scholar at the University of California, Berkeley. He is the author of Long Range Public Investment: The Forgotten Legacy of the New Deal. He serves on the Research Board of the Living New Deal.