Susan Quinn recounts a fast-paced story about the Federal Theatre Project through the lives and times of those who conceived and led this unique New Deal relief program— Harry Hopkins, the driven director of the WPA, and the intrepid Hallie Flanagan whom Hopkins convinced to run the risky project. Both grew up in Iowa City and attended Grinnell College, after which Hopkins pursued social work in New York City and Flanagan headed an innovative performing arts program at Vassar College.

Quinn recounts a train ride in 1933 during which Hopkins and Flanagan envisioned the new federal program to employ thousands of starving artists—actors, directors, designers, writers, and tradesmen. “Hell!” the notoriously blunt Hopkins says. “They’ve got to eat just like other people.” 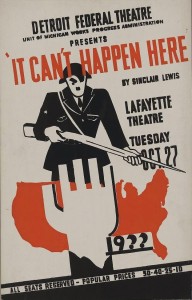 Flanagan was excited by the challenge of bringing live theater to millions of Americans for the first time and saw the potential of the FTP to take on the country’s deep-seated racism and social inequality. She sought Hopkins’ assurances that the government-subsidized FTP would be free from censorship—a difficult promise to keep. At times, she turned to First Lady Eleanor Roosevelt—an enthusiastic ally of the FTP—to overcome red tape and political opposition.

Though the FTP’s budget was a tiny percentage—one-tenth of one percent– of the WPA’s overall expenditures, it had been labeled a boondoggle by the press, politicians, banks, businessmen, and even theater owners and workers fearing low-quality, low-priced competition. Yet by the end of 1935, 9,245 people got jobs with the FTP in big cities, regional theaters, and small towns nationwide. Some FTP troupes performed for the Civilian Conservation Corps at remote camps.

The FTP produced dramas, comedies, musicals, and children’s theater, including The Revolt of the Beavers, which told the story of a cruel beaver chief who keeps the underling beavers busy processing bark but shares none of the proceeds from their labor. Many scripts were derived from news articles about the hardships of the Great Depression, a controversial genre Flanagan dubbed “The Living Newspaper.”

The FTP’s leading lights included T.S. Eliot, Arthur Miller, Sinclair Lewis, John Houseman, and Orson Welles. It was the Welles/Houseman production of Marc Blitzstein’s pro-labor musical The Cradle Will Rock that proved most dangerous for the FTP. Flanagan was called before the House Un-American Activities Committee to defend the program before its enemies.

Few government programs received or weathered such scrutiny as the FTP. Thanks to Quinn’s book, this creative and daring project remains in the spotlight.