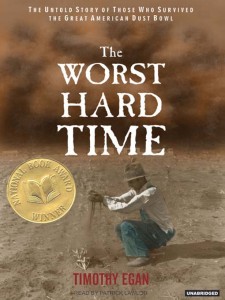 On Black Sunday, April 14, 1935 a cloud two hundred miles wide carrying more than 300,000 tons of topsoil blackened the skies over the Great Plains. People lost their way as the wall of darkness rolled in; stores and schools were boarded up; cattle lay dead in the dust.

New York Times columnist, Pulitzer Prize winner Tim Egan earned the National Book Award for The Worst Hard Times. This must-read book is both a breathtaking historical narrative and a cautionary tale. Through painstaking research, including interviews with some of those who survived the Dust Bowl years, Egan paints a vivid portrait of America’s greatest environmental disaster.

Egan traces the roots of the Dust Bowl from wresting the High Plains from Native Americans to the “plow up” that tore the land apart. He brings to life those who wrestled the dry landscape—hard scrabble farmers, railroad barons, real estate speculators, and politicians. Most lost.

From 1930 to 1935 there were 750,000 bankruptcies or foreclosures on farms. Nearly a million people left the Great Plains—the largest displacement America had ever seen.

FDR clung to the belief that there was a way for man to fix what man had broken. Immediately upon taking office in 1933, he issued a call to arms to restore the land and keep farmers on it. 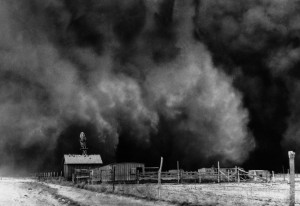 Dustbowl by Arthur Rothstein
About to be engulfed in a gigantic dust cloud is a peaceful little ranch in Boise City, Oklahoma where the top soil is being dried and blown away. This photo was taken on April 15, 1935.
Photo Credit: Associated Press

Some of his first acts under the New Deal–subsidizing farmers, anchoring the land, planting millions of trees—were controversial even among members of his Brain Trust. Interior Secretary Harold Ickes questioned perpetuating farming on the parched prairies. In his view the land was spent. Meanwhile, Hugh Bennett, who fought for the creation of the Soil Conservation Service and became its first director, became a crusader when heartland politicians resisted federal involvement.

Egan recounts that Bennett was trying to win over skeptics in Congress when the sky over the Senate Office Building grew dark with dust. “This, gentleman, is what I’m talking about,” Bennett told them. “There goes Oklahoma.”

Egan’s epilogue will disabuse the notion that such massive environmental disasters are in the past. Bloated subsidies to corporate agriculture; ghost towns dotting the Plains; alarming rates of groundwater draw down; and persistent drought may be harbingers of Black Sundays ahead.

Susan Ives is editor of the Living New Deal Newsletter