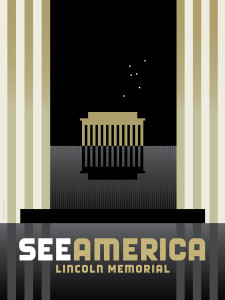 To celebrate the 100th birthday of the national parks, the Creative Action Network (CAN) produced “See America,” a collection of contemporary national park posters inspired by the Works Progress Administration (WPA). The hardcover book is the brainchild of CAN co-founders Aaron-Perry-Zucker and Max Slavkin, who combined their appreciation of the iconic travel posters created by WPA artists during the Great Depression with their own passion for fostering creative communities.

“See America” features 75 colorful posters of national parks and monuments from all 50 states along with thumbnail maps and little-known gems about each park’s history and unique character.

For example, public demand to memorialize President Lincoln began immediately after his assassination, yet it took 50 years of fundraising and Congressional debate for construction on the Lincoln Memorial National Monument to begin. It opened in 1911. Haleakala National Park, established in 1916, is home to more endangered species than any other park in the National Park Service. Joshua Tree National Park, founded as national monument in 1936, exists today thanks to a tenacious conservationist, Minerva Hamilton Hoyt, who appealed to FDR to establish a desert national monument. Now a national park, Joshua Tree harbors 800 species.

CAN is an online community of more than  ten thousand graphic artists dedicated to using their creativity to raise awareness of social causes. Some 750 artists submitted more than a thousand poster designs for the “See America” project. Artists are paid for the sale their posters, which are displayed on CAN’s website. Proceeds also benefit the National Parks Conservation Association. Learn more at Seeamericaproject.com 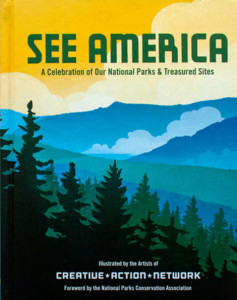