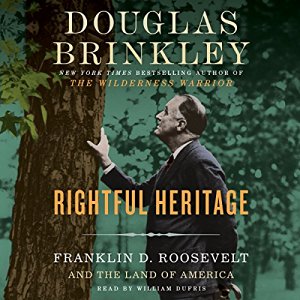 To the innumerable gifts the New Deal’s work relief agencies left to Americans must now be added a vast archipelago of parklands and entire species of plants and animals preserved by the personal initiative of President Roosevelt. One is left with that inescapable conclusion after reading Douglas Brinkley’s tome, Rightful Heritage: Franklin D. Roosevelt and the Land of America. Brinkley convincingly argues that FDR is America’s greatest environmental leader, exceeding even his admired distant cousin Teddy.

Brinkley lays a solid foundation for that claim with a six chapter section entitled “The Education of a Hudson River Conservationist, 1882-1932” in which the young FDR develops a deep interest in and love for nature on his family’s expansive riverfront estate in Hyde Park — especially for its trees and birds. In later life, whether in the Oval Office or on his extensive travels, his knowledge of the natural world astonishes those who know him, as does his determination to remediate what centuries of exploitation had done to the continent.

His creation of the Civilian Conservation Corps in the first weeks of his administration was Roosevelt’s remedy, he said, of simultaneously healing both damaged men and damaged land. The CCC was his own idea as well as his favorite and most popular work relief agency, and the one he wanted made permanent. The cumulative labor of his “tree army,” made possible a quantum leap forward in soil conservation and forest planting and care, but above all in the expansion of public lands forever available to and owned by all Americans.

By administrative action and executive order, FDR and his chosen associates created a continent-spanning network of national parks, forests, historic and archaeological sites, and wildlife refuges. The latter, in particular, brought animals such as the pronghorn antelope, Canada goose, trumpeter swan, whooping crane, and bighorn sheep back from the brink of extinction. The extent of those accomplishments is graphically evident in maps and lists, which Brinkley provides in 36 pages of appendices as well as a text that reveals Roosevelt’s personal commitment to conservation even while he was engaged in fighting a Great Depression and world war. He authorized Big Bend National Park, for example, on D-Day.

His accomplishments were, in hindsight, not all positive. Even at the time, fisheries biologists understood that the dams he loved to build radically disrupted riverine ecology as their reservoirs heedlessly drowned lands vital to Native Americans. Secretary of Interior and PWA czar Harold Ickes, who otherwise emerges as an even fiercer preservationist than FDR, had a pharaonic obsession with pouring concrete to kickstart the lagging construction industry and generate cheap electricity. The CCC introduced the forest-devouring plague of kudzu vine to the South in a misguided effort to check soil erosion. And Republicans likened his use of executive orders to “lock up” public lands to the tyranny of Adolf Hitler, laying the rhetorical groundwork for ranchers to “take back” public lands.

Nonetheless, few who read Rightful Heritage can deny that FDR often saw farther than his contemporaries let alone many today. On his perilous flight to Tehran to meet with Stalin and Churchill in 1943, a year and a half before his death, Roosevelt studied the deserts of the Middle East as he had the American landscape from train windows, and concluded that the region’s ruin was largely the result of millennia of deforestation and grazing. He wanted conservation to be a central concern of his United Nations after the war not only as a means of alleviating poverty and its pathologies but of leaving to future generations a more vibrant Earth which, he passionately believed, was everyone’s rightful heritage.