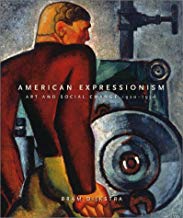 By contrast, the city’s political and art leaders have been conspicuously silent over the San Francisco School Board’s unanimous vote last month to paint over the work of another Russian immigrant artist, Victor Arnautoff. Word has it that the thirteen frescoes he painted in the lobby at George Washington High School are just too hot to handle 83 years after their creation. It took an international outcry to persuade the school board to reconsider and pass a “compromise” resolution to “permanently” hide them from public view.

The sound of little but crickets from local art museums led me to reread Bram Dijkstra’s 2003 book American Expressionism: Art and Social Change 1920-1950. Dijkstra, a wide-ranging cultural critic, argues that American artists were to a large extent freed of the art market’s constrictions by the New Deal’s unprecedented patronage. That freedom allowed them to respond to the Great Depression by developing a unique native expressionism that sought to educate and motivate common people to social ills such as the poverty and racism afflicting the nation.

The abrupt ascendance of arcane and apolitical art movements such as Abstract Expressionism following the war eclipsed the figurative work of these perceived troublemakers, and the modernist canon has continued to do so ever since.

Dijkstra discovered by visiting museums across the country that their vaults are full of work produced in the interwar period that curators seldom mount for public display. Museum staff instead give premium wall space to postwar superstars whose works command astronomical prices on the international art market. By contrast, the often astounding images with which Dijksta’s book is so richly illustrated were produced by artists who sank into relative obscurity and whose canvases command nothing like the $50 million that the San Francisco Museum of Modern Art recently got for a deaccessioned Mark Rothko it deemed second-string.

Dijkstra recounts that Refregier himself felt the big chill setting in after attending the opening of a Rothko exhibition at that very museum in 1947. It was a “handsome” show, he observed, but “there is no content as [Rothko] works [are] non-objective. No doubt the new movement will displace the realism of the ‘30s and ‘40s. It’s part of the general withdrawal from the humanist concept,” of which Refregier saw himself as a last man standing. “It’s a cultural component of the cold war ideology.”

Refregier mourned the departure from Washington of New Dealers such as Hopkins, Perkins, and Morgenthau after Roosevelt’s death, “people who had a degree of social and cultural background that made them act on behalf of the needs of the common people and who understood the need for a government cultural program,” Dijkstra explains. It was a truly historic loss because, he says, they had “begun to commission the kind of work that . . . would have eventually developed into a monumental art of world significance,” as in Mexico.

One such monumental work is Arnautoff’s “Life of George Washington” that the School Board seeks to expunge. There are many reasons to oppose this, such as the misreading of the artist’s critical take on the first president and the principle of protecting controversial art. But, one wonders, would its enemies have dared to attack murals painted by Mexico’s legendary trio of Siquieros, Orozco, or Arnautoff’s mentor, Diego Rivera?

Dijksta’s provocative tome is a reminder not only of an immensely rich but little-known period of American art, but of how much of its legacy has already been destroyed by those offended by what its artists and administrators sought to achieve for the common good.