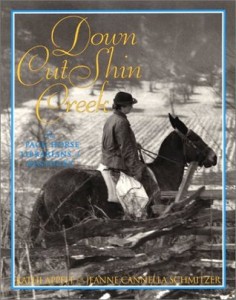 Building the roads, bridges, and other infrastructure that became the hallmark of the WPA was considered “men’s work.” But by 1935, with millions of women heading households and on relief, the WPA sought jobs for them, too. Young women were hired as traveling librarians, bringing free library services to thousands of Americans for the first time.

Rural communities had few roads so the librarians had to be resourceful. Depending on the terrain, they frequently made their rounds on foot, riding horseback, or by boat. The story of these intrepid young women comes alive with historic photos in this small book, which will delight young and adult readers alike.

According to Down Cut Shin Creek, The Pack Horse Librarians of Kentucky, “The Kentucky pack horse librarians were tough. They had to be in order to travel atop horses and mules over the rockiest terrain, through all kinds of weather, carrying books and magazines up and down creek beds named Hell-for-Sartin, Troublesome, and Cut Shin because of their treacherous natures.” 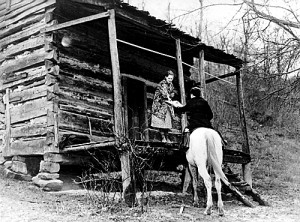 Kentucky was particularly hard hit during the Great Depression. With the coalmines closed, families were often hungry and cut off from the wider world. The pack horse librarians that made their way to remote one-room schoolhouses and ramshackle cabins became a lifeline in ways not foreseen by WPA administrators. Beyond the books and magazines they carried in their saddlebags, the women were called upon to carry messages between the isolated mountain families, send for doctors and midwives, and deliver medicine. They looked in on shut-ins and read aloud to those unable to read.

By 1943 with the New Deal largely de-funded, nearly a thousand pack horse librarians had reached more than a million and a half Kentuckians. 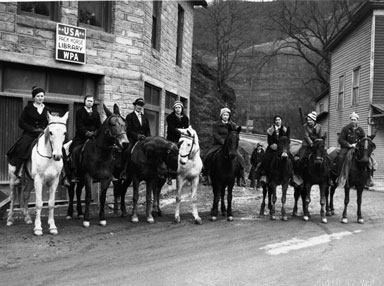 Carl D. Perkins was a teacher in a one-room schoolhouse in Knott County, Kentucky during the 1930s.  In 1956, as a member of Congress, he introduced legislation authorizing the first federal funding for permanent public libraries. The bill specifically provided funds for bookmobiles. Perkins credited his support for public libraries to the pack horse librarians of Kentucky.

With thanks to Jeanne Cannella Schmitzer and Angelia R. Pulley.

Read excerpts from Down Cut Shin Creek, The Pack Horse Librarians of Kentucky.