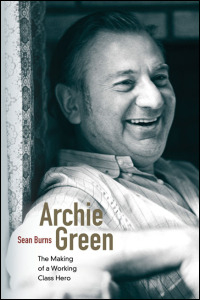 Like many others, I made the pilgrimage to Casilli Street in San Francisco to interview the American folklorist Archie Green.  As usual, he was sitting in the front window of his home watching the street.

Although we were a generation apart, there were several parallels in our lives – moving to Los Angeles in our youth, graduating from UC Berkeley, love of the outdoors, working as a union carpenter, an admiration for the New Deal.

Archie personified my ideal of the worker/intellectual. His involvement with the New Deal began with a National Youth Administration (NYA) job while a student at UC Berkeley. Upon graduation, he enlisted in the Civilian Conservation Corps (CCC)—rare for someone with a college education—and worked as a firefighter and road builder along the Klamath River in Northern California. Soon after he began working as a shipwright in San Francisco and was drawn into the city’s lively cultural scene, including the favorite watering hole of New Deal artists—the Black Cat Bar in North Beach.

Later Archie developed an interest in labor folklore and began documenting the culture and traditions of American workers. He gathered and commented upon the speech, stories, songs, emblems, rituals, art, artifacts, memorials, and landmarks that constitute “laborlore.” He not only collected material from laborers but also encouraged workers to preserve their own stories.

Documenting and honoring working-class culture became Archie’s focus for the remainder of his life. After many years lobbying Congress, Archie succeeded in getting a bill passed that established the American Folklife Center within the Library of Congress to preserve, support, revitalize, and disseminate American folk traditions. The Center’s archive, which includes Archie’s work, is open to researchers and the general public.

Author Sean Burns spent considerably more time with Archie that I did. His interviews and research into Archie’s remarkable life for this book make it more than simply a biography. Burns himself calls it  “a discussion of Green’s political and intellectual formation”–what pushed Green into a life of activism. It is a tribute to a man who was deeply committed to cultural pluralism and a path of work, scholarship, and action.