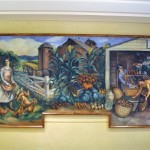 The old Bethesda Post Office, built by the WPA in 1938, was recently closed and sold to a private developer – a story that is all too common today (see Save the Post Office). But the prominent mural by Robert Gates, who later became head of the Art Department at American University, has been saved.  After sitting in storage for the last year and a half, it has been restored and will soon be installed in the county Regional Services Center for Bethesda and Chevy Chase, Maryland.  The mural portrays the Bethesda Farm Women Market, created in 1932, and a farm supplying the market.  For the story, see the Bethesda Now website.  One correction, however, is that while the old Bethesda Post Office building is of WPA provenance, the mural would surely have been paid for by the Treasury Section of Fine Arts project.