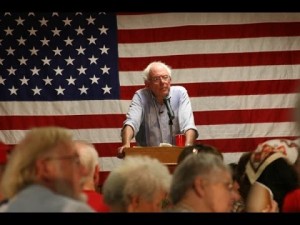 In running for President, Sen. Bernie Sanders has compelled Americans to rethink some long-standing political bromides of the neoliberal era, such as the evils of government action and universal health insurance. But how radical is Bernie, really? As Sanders and others have pointed out, he’s basically a New Deal Liberal. It’s a sign of how far the country has moved from New Deal values, that some see his positions as too far left. Yet, in making a case for his ideas as patriotic, Sanders recalls a moment when social and economic justice were envisioned as mutually reinforcing and as essential to American freedom.  Even more surprising to his critics has been Sanders’s popularity among the young and his staying power in the presidential primaries.  Evidently, his old-fashioned New Deal ideas are finding a large audience.

A recent Report in the New Yorker by Jedediah Purdy recounts the source of Sanders’s political philosophy of “democratic socialism”: “the Vermont senator and Democratic Presidential candidate opened with a long invocation of Franklin Roosevelt and the social protections that the New Deal created: minimum wages, retirement benefits, banking regulation, the forty-hour workweek. Roosevelt’s opponents attacked all these good things as ‘socialism’, Sanders reminded his listeners”. FDR’s opponents, not the president himself, used the term, but for Senator Sanders it is a clearly-defined vision with roots deep in America history and links to one of the country’s most vaunted leaders.

Even so, Purdy ends by pointing out the ways in which FDR was actually more radical than Bernie Sanders: “Pressed in the most recent Democratic debate to say how high he would take the marginal income tax, Sanders answered that it would be less than the ninety (actually ninety-two) per-cent level under the Eisenhower Administration. He added, to cheers and laughter, ‘I’m not that much of a socialist compared to Eisenhower’”.  It’s worth reading the rest of Purdy’s post to find out why Sanders adopts the mantle of socialism and why, though he may be inspired by the New Deal’s ideas of economic security as the foundation of freedom, the present moment is different in important ways.

In still others ways, Sanders’s campaign evokes the turmoil of the 1930s, when a bitter public sought scapegoats for their anger and the pall of anti-Semitism hung over Europe.  Spurred by demagogues like Charles Coughlin, this idea that Jews control the world’s money and financial institutions gained traction in the U.S., and some even derided the New Deal  as “the Jew Deal”.  At a recent appearance at the Apollo Theater in Harlem, Sanders was asked a question that could’ve come straight from one of Coughlin’s speeches. A young man stood and asked, “As you know, the Zionist Jews—and I don’t mean to offend anybody—they run the Federal Reserve, they run Wall Street, they run every campaign…. What is your affiliation to your Jewish community?” The intense boos from the crowd indicate that such recidivist ideas have little traction today, but Sanders used the comment as a springboard for defining his own relationship to his Jewish background, expressing pride but also promoting the fight for human rights for all people.