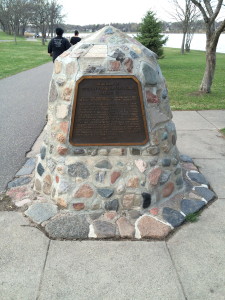 A monument to those CCC’ers who lost their lives on duty. Natalie Heneghan, 2015

On the west bank of Lake Phalen, on the east side of St. Paul, sits an unassuming monument honoring the men who died while working for the Civilian Conservation Corps (CCC). The brainchild of Company 4727 Educational Advisor Edward Mueller, the memorial is a mounded collection of hundreds of stones from CCC camps throughout the U.S., rock donations from three federal departments, and a slab from the floor of the White House. It speaks to the dangers of working in the wild, the camaraderie that developed among the workers, and the government’s gratitude.

Company 4727 set up camp about ten miles north of St. Paul in August 1935. In their two years in Minnesota, the men of Company 4727 graded county roads, built park amenities, and conducted an exploratory survey of soil conditions on nearby Vadnais Lake. Enrollees, mostly from North Dakota, nicknamed their camp “Eveless Eden” and their monthly newsletter the “Eveless Eden Eavesdropper”–the men were clearly  attentive to both the area’s natural beauty and the CCC’s gendered component.

The newsletter was officially titled Bear Facts, and it tracked the monument’s construction. Its editors praised Mr. Mueller, a beloved advisor and teacher, for his “novel and excellent idea” for the monument. Mr. Mueller integrated monument planning into camp education. (Reports noted, however, that construction took place on weekends only by men interested in volunteering their time, and that it cost the government nothing.) Early plans for the memorial situated it on the banks of Vadnais Lake, close to the camp. Superintendent William Kaufman of St. Paul Parks suggested Lake Phalen, just south of Vadnais Lake. At Phalen, the Kaufman could ensure “perpetual care” for the monument. Company 4727 spread word through the CCC’s national newsletter, Happy Days, to solicit “native stones” from 400 camps. Requests specified that stones should be less than four pounds, allowing companies nationwide to send them via franked mail. Stones started arriving in St. Paul late in the summer of 1936. President Franklin Roosevelt sent a stone slab from the floor of the White House, which, although it broke in transit, formed the cornerstone of the memorial. In November, stones from the Departments of Agriculture and Interior arrived, and the company expected a package from the Department of War soon after.

The onset of winter weather pushed construction back to the spring of 1937. Enrollees formed the monument from the “hundreds” of donated stones. (Bear Facts offered no final count of contributions, though they expressed gratification with the enthusiastic response of camps nationwide.) Company Foreman John Carlgren directed construction. By late spring, work was completed, and the company placed the finishing touch–a bronze plaque–on the monument. Advertisements for local businesses, contributions from the St. Paul Chamber of Commerce funded the plaque.

In July 1937, the company transferred to a camp near Fargo, North Dakota. They had planted thousands of trees, beautified lakes and parks, and made the natural resources of Ramsey County accessible to the public. But of all their projects, the one-of-a-kind stone monument will forever stand as a memorial to enrollees nationwide and as a testament to the initiative, creativity, and integrity of Company 4727. 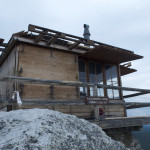 At 9,500 feet, the Black Mountain Lookout Tower offers a stunning, 360-degree view above the tree line of Wyoming’s Bighorn National Forest. The Civilian Conservation Corps (CCC) built this tower in 1939, one of hundreds of such structures erected by young men working for the federal government during the New Deal. Though no longer in use, the Black Mountain Lookout Tower has remained a popular hiking destination but had fallen into disrepair.

Each morning for a week last summer, I climbed to the top of the tower–hammer in one hand and a pile of shingles in the other–and took part in its restoration. The preservation of Black Mountain Lookout Tower was facilitated by HistoriCorps, a non-profit based out of Denver, CO. HistoriCorps protects and rehabilitates old structures throughout the country while offering unique outdoor experiences for their volunteers. HistoriCorps’ 2014 season included twenty sites, four of which were CCC-built. Projects ranged from cabins to lookout towers to amphitheaters.

The Civilian Conservation Corps, along with the other public works agencies created under the New Deal, built a vast network of towers, bridges, lakes, dams, forests, roads, parks, post offices, and pools throughout the country. These resources have been essential to our communities and infrastructure for decades, yet many have fallen into disrepair. I loved being able to add a hands-on dimension to my passion for these places. The lookout tower has been out of use since 1987. Like many New Deal projects these days, it still serves a valuable purpose; it just needed a little facelift. It was thrilling to breathe some life into it and begin to see its future as a rental cabin for hikers. 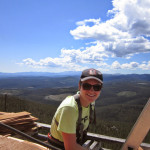 Natalie at work restoring the tower.

Both literally and figuratively, the hands-on aspect of HistoriCorps took me to the backcountry of preservation. As such, the project offered a behind-the-scenes view, one that I don’t often get at the Preservation Alliance of Minnesota, where my work stays on the advocacy and outreach levels. Indeed, our tasks included re-shingling the roof of the tower, cleaning out the interior, hauling scraps down the mountain, applying putty to windows,and sanding shutters. It was the epitome of a team effort, and I quickly realized I had stumbled upon an impressive cadre of hard-working, civic-minded people. In a way, HistoriCorps draws on the tradition and legacy of the CCC. Volunteers are committed to the preservation and accessibility of historic places on public lands and the stories behind them. Like CCC enrollees, we have the opportunity to gain personal and professional skills.

We were a small but impassioned group, and our nightly camp dinners proved we had more than enough to talk about. The three others and I chatted about favorite hikes and bucket list adventures. Amateur historians in addition to outdoor enthusiasts, we talked New Deal policies, the Protestant Reformation, generational gaps, and turtle extinction in the Galapagos (via a recent This American Life episode). I wondered how I could feel so comfortable and challenged by three semi-strangers whose paths happened to cross with mine for this one week in August, but I have to credit it to HistoriCorps’ brilliant set of “requirements”: interest in history, love of the outdoors, and not minding getting your hands dirty (or full of cedar shingle splinters, in my case).

Since returning from the project, I have encouraged many people to give HistoriCorps a try. I played a very small part in the Black Mountain Lookout Tower’s rehabilitation, and an even tinier role in its history. But for a self-professed New Deal nerd like me, that was more than enough. 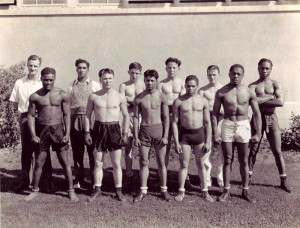 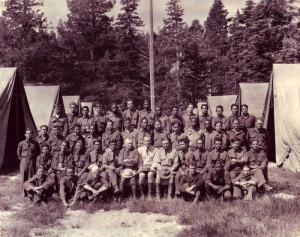 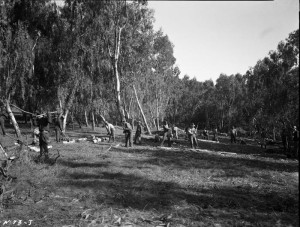 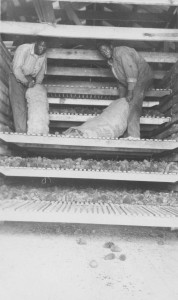