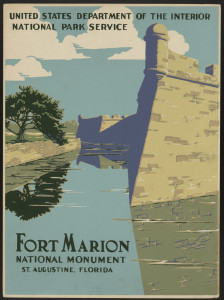 One of the countless, vibrant depictions of nature produced by the WPA for the “See America” campaign.  Source High Speed Productions, Inc.

The August issue of venerable arts and (counter)culture magazine Juxtapoz explores the image of nature in artworks created by Works Progress Administration (WPA) labor for the “See America” campaign, promoting the National Parks.

Carlo McCormick’s “THE WPA AND HOW THE FEDERAL ARTS PROJECT CHANGED AMERICAN ART,” considers how artists represented American nature in the 1930s and 1940s, situating the varied depictions within a longer national legacy: “From the folkloric to the Transcendentalists, the naturalists to the plein air painters, we’ve long been imagining nature, but perhaps never so vividly as we did in our single most crisis of confidence, the Great Depression.” “See America,” and indeed other New Deal representations of nature, promoted the all-important idea, McCormick argues, that “nature itself can make us whole again.”

The image of the natural sublime wasn’t always cheery in Depression-era art. But it was generally depicted as useful, a space for reflection during a moment of transition. McCormick suggests that this amounts to a “quiet politics” that “runs amok in Steinbeck’s Grapes of Wrath, a cruelty of the dust bowl on the Okies metaphor for our social ills, it ransacks our native lands with the folly of our greatness as perpetrated by Mount Rushmore. It lays open before us as the freedom highway set forth by Woody Guthrie in his depression-era ‘This Land is Your Land,’ where any and all can roam, ramble or follow their footsteps to find, as he describes in a verse that has subsequently been changed, ‘was a wall there that tried to stop me / a sign was painted said private property / but on the back side it didn’t say nothing.’” 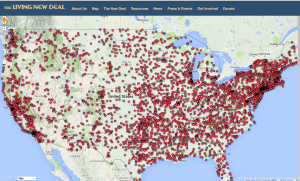 The Living New Deal project has been snowballing: More people are finding us, signing up for our newsletter, and volunteering to assist in the crowdsourcing of New Deal buildings, parks, artworks and all the rest.

Our thanks to all of you for your support and help over the years: collecting, chronicling, correcting and cheering us on.

And keep your eyes on the Living New Deal website to see new features appearing this summer: 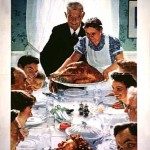 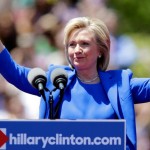 State of the Union, President Franklin Delano Roosevelt outlined his vision of America as redefined by the New Deal and as defining itself against the imminent threat of fascism. (Eleven months later, the U.S. would enter World War Two.) That vision was encapsulated in his Four Freedoms, commemorated two years later in a series of paintings by Norman Rockwell (one of which is pictured here). They were: freedom of speech, freedom of worship, freedom from want, and freedom from fear. (Read and listen to the speech.)

On Roosevelt Island this past Saturday, June 13, Hillary Rodham Clinton auspiciously  kicked off her campaign for president. According to the New York Times, among the policies she specified were universal pre-Kindergarten, paid family leave, equal pay for women, and creating a revised tax code that “rewards hard work at home,” rather than “stashing profits overseas.” Amy Chozik, writing for the Times, points out that Clinton “did not detail how she would achieve those policies or address their costs.” Even so, as Annie Karni notes for Politico, Clinton denounced Republicans for, in her words, “reject[ing] what it takes to build an inclusive economy. It takes an inclusive society.”

Candidate Clinton is doing more than evoking the spirit of FDR’s struggle to effect social justice and economic opportunity for all Americans. Indeed, she’s deploying a political rhetoric drawn directly from the Four Freedoms in her Four Fights. Byron York of the Washington Examiner reports that Clinton declared, “If you’ll give me the chance, I’ll wage and win Four Fights for you”: These fights, she went on, aim “to make the economy work for everyday Americans”; “to strengthen America’s families”; “to harness all of America’s power, smarts, and values to maintain our leadership for peace, security, and prosperity”; and to “refor[m] our government and revitaliz[e] our democracy.”

The legacies into which Clinton is tapping seem to have real sway now, suggesting a move away from Democratic neoliberalism to a concern for social and economic inequality that has its foundations in the New Deal. Among prominent politicians, New York City mayor Bill de Blasio is leading the charge with an ambitious plan to, among other things, create more affordable housing and make it easier for undocumented New Yorkers to rent apartments and open bank accounts. And for him, it’s personal. A recent Rolling Stone profile recounts how the mayor, raised by older parents in Massachusetts, was early on introduced to stories of the Great Depression and New Deal. “It’s almost like we skipped a generation,” he recalls. “We would have these family gatherings, and everyone would be around the table, and it felt like there were two empty chairs for Franklin Roosevelt and [progressive New York mayor] Fiorello La Guardia. There was a reverence for them in our family. I was steeped in the notion that you take heart from a government that is trying with all its might to find a solution for you.” 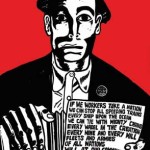 Since 1994, San Francisco’s LaborFest has brought together workers, artists, and scholars to memorialize America’s labor movements, past and present. Through panels, films, concerts, and site visits, it aims to foster dialogue across lines of race, ethnicity, gender, and craft.

This year, LaborFest will celebrate labor balladeer Joe Hill (pictured here), framed for murder and executed in Utah one hundred years ago. It will examine contemporary workers’ struggles, with special focus on privatization and wealth disparity in the tech economy. And it will continue to showcase important moments in labor solidarity—including the organizational efforts and artistic expressions of the New Deal. Events for this year begin on July 3rd.

Members of the Living New Deal team are lending a hand in this popular celebration, as they have for several years.  Join Project Advisor Harvey Smith on Sunday, July 5th for a walking tour of Coit Tower’s murals. That same day, New Deal Film Archivist Chris Carlsson will lead his “Cycles of Labor History Bicycle Tour.” A week later, Harvey Smith and Gray Brechin will conduct a bus tour of WPA sites around San Francisco.

For a complete list of activities, as well as information on ticket prices and how to register, please visit LaborFest’s page of scheduled events. 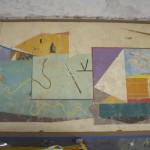 For almost a year, between midnight and 4 a.m., conservator Gillian Randell, of the restoration firm EverGreene Architectural Art, examined and, with surgical precision, scraped away at the walls of the Goldwater Memorial Hospital, Roosevelt Island, New York City, in anticipation of its demolition. She worked at night because many of the day rooms were still used by patients. Alone in what had been a filming location for The Exorcist, Randell was in search of two 50’ x 7’ oil-on-canvas murals that had been commissioned by the Works Progress Administration (WPA) and installed in 1942—and painted over fifteen years later.

The search for, and preservation of, WPA artworks doesn’t normally entail oversight by the New York City Arts Commission. But what set the two Goldwater Memorial Hospital murals apart is that they don’t look like normal examples of WPA art. As Arts & Antiques Magazine, which recently covered this story, notes, these pieces, by Albert Swinden and Joseph Rugalo, “were forerunners in abstract mural painting.” (A third, by Ilya Bolotowsky, was uncovered in 2001 and removed from the hospital). These artworks, that is, go against the grain of the typical WPA aesthetic, with its figurative scenes of local color and heroic workers. And in this way, Swinden’s and Rugalo’s murals suggest the kinds of free expression that were promoted by the federal government under the administration of President Franklin Roosevelt and became the training ground for mid-century artistic experimentation. They provide a capacious vision of the messages art can convey to the people.

This also made recovery difficult. As Randell attests, “Because these are abstract pieces, layers of color don’t necessarily make sense…. It’s not like you would find a bird, for instance.” It was difficult, that is, to know what to look for. Ultimately, Randell found two pieces that, though abstract, are clearly indebted to their environment. In the words of Art & Antiques, they “play off the presence of the East River, which was visible through the windows of the day rooms, and draw upon the peacefulness and kinetic energy of water.” Oh, and Rugolo’s mural has what looks like a shark.

As to their future: In April 2014, a fifteen-person team, employed by EverGreene, carefully removed the murals, rolled them into tubes, and transported them to their headquarters, where they remain as of this writing. Perhaps Cornell Tech, which will soon inhabit the site, and has already signed on to house the Bolotowsky mural, will install these other two. If you have any ideas for a future home for these murals, or if you’d like to keep tabs on this story as it unfolds, please contact [email protected]

Thanks to Oliver Williams, Living New Deal Research Associate and Professor Emeritus of Political Science at the University of Pennsylvania, for relaying this article, which is worth reading in full! 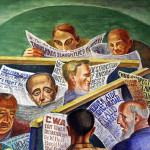 Margot Smith is a retired social scientist currently residing in Berkeley, California, where she made award-winning independent videos on political and social justice issues. Recently, she contacted the Living New Deal to lend some of her work to our project.

Take a minute and a half to watch cleaned-up promotional footage from The Works Progress Administration (WPA). It provides a fascinating glimpse into the practical and philosophical aims of the WPA, as it put millions of Americans back to work. (Who knew that art was important to a healthy citizenry?!) Spend some time considering the importance that this film places upon multiculturalism, in America’s past and present, as a form of social justice. Or set aside more time and explore the diversity of aesthetic and historical visions that comprised San Francisco’s myriad murals, produced with funds provided by the federal government during Franklin Roosevelt’s presidency. Finally, consider the life and work of San Francisco artist and muralist Bernard Zakheim, as narrated by his family. Zakheim’s New Deal murals are still around, gracing the walls of Coit Tower, the San Francisco Jewish Community Center, and UC San Francisco’s Tolman Hall. If you like what you see in these videos, go check them out in person!

On this day, April 8,1935, Congress approved the Emergency Relief Appropriation Act, establishing the Works Progress Administration (WPA). It was the largest and most ambitious New Deal agency, employing millions of unemployed people (mostly unskilled men) to carry out public works projects. Almost every community in the United States had a new park, bridge or school constructed by the WPA. We need a new New Deal!

The Living New Deal has just published a map to New Deal sites in San Francisco. The “Art and Architecture of the New Deal” is a guide to eighteen of the more than 300 known public works projects the New Deal left to the City by the Bay—artworks, parks, civic buildings, schools and more. The San Francisco guide, meant for locals and visitors alike, offers insights into the city’s labor and art history. It is the first in a series of New Deal city maps showing the impact of government programs that provided millions of jobs to unemployed Americans during the Great Depression.