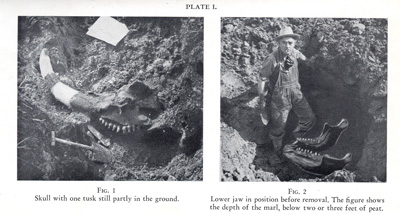 It was September 1935. A WPA project was underway to drain and dredge a muck-filled pond on Charing Cross Road in Bloomfield Hills, Michigan, a leafy suburb Detroit, a city hard hit by the Great Depression.

Suddenly, a steam shovel on the south side of the pond unearthed an enormous bone from the muck and marl. The workers first thought they had discovered the remains of a dinosaur and dubbed the site “Dinosaur Pond.” They contacted geologists at the nearby Cranbrook Institute of Science, who carefully excavated the “dinosaur” and properly identified it as a young mastodon, still with its milk teeth. The skull, jaw, tusks and a few vertebrae were taken to the University of Michigan’s Museum of Natural History in Ann Arbor and further studied by paleontologists, who deemed the fossil to be 10,000 years old. 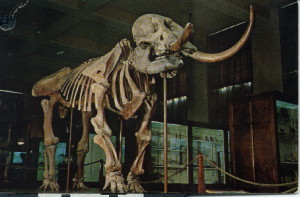 Mastodons were shaggy, elephant-like creatures standing up to 14 feet tall and weighing 4 to 6 tons. They lived 30 million years ago—long after the dinosaurs, which thrived in the Mesozoic era some 250 million to 66 million years ago. Mastodons, like their larger cousin, the wooly mammoth, roamed the region as recently as 10,000 years ago.  With cusped teeth for crushing leaves and branches, mastodons fed on plants around creeks and marshy areas, where their remains tend to be found buried in mud. Early discoverers of mastodon bones in Europe erroneously assumed that the huge mastodons had been burrowing animals.

In 1936, a WPA crew digging a ditch near Kenosha, Wisconsin, came upon a 20-foot leg bone. The local history museum applied for a federal grant— approved by then-President Franklin Roosevelt—to excavate the skeleton of what turned out to be a wooly mammoth. In 1935, WPA workers clearing a creek near Williamston Township, Michigan, found a mastodon jawbone with several teeth still intact. 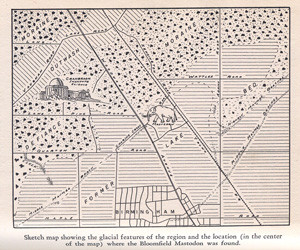 Just last January a contractor noticed a giant rib sticking out of the ground at a job site near Lansing. Markings on this and dozens of other mastodon bones found there indicate the animal may have been a meal for Paleo-Indians some 12,000 years ago.
Records show that 250 mastodon bones have been unearthed in 50 locations across Michigan. The mastodon was declared the “official state fossil” in 2002.

I recently made a trip to Ann Arbor hoping to see “Bloomfield Hills Mastodon.” Upon entering the museum I was awestruck by a huge mastodon skeleton on display, but it wasn’t the mastodon I was looking for!  Ironically, this specimen had been discovered at Hyde Park, New York, near the Roosevelt family estate.

Where was the Bloomfield Hills Mastodon? It’s on loan to the Cranbrook Institute of Science, only a few miles from the pond where WPA workers discovered it 80 years ago.