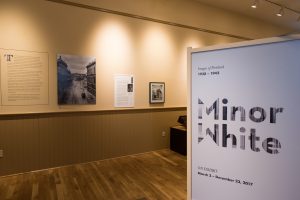 The Architectural Heritage Center’s current major exhibit, “Parting Shots: Minor White’s Images of Portland, 1938-1942,” should draw those interested in photography, architectural history, Portland’s history, and the contributions of New Deal-supported work. This beautifully and carefully considered exhibit brings together materials from the Portland Art Museum’s and Oregon Historical Society’s photographic collections and architectural artifacts from the Bosco-Milligan Foundation/Architectural Heritage Center’s collection to celebrate Minor White’s early work as a photographer and the buildings he “preserved” on film.

During the fall of 1938, soon after arriving in Portland from his home in the Midwest, Minor White noted in his journal that, thanks to the Works Progress Administration, he was finally able to pursue in earnest his own camera work. By finding a position as a “creative photographer” with the WPA-funded Oregon Art Project, White launched a forty-year career that established him as one of the leading photographers of the twentieth century. His Portland commissions involved photographing historic buildings prior to their demolition. White’s good fortune with this beginning, arguably, is matched by Portland’s, given the legacy his architectural photographic collection provides to the city. White documented the late-nineteenth-century cast iron buildings of Portland’s downtown just as they were slated for demolition as part of the construction of Front Avenue, a public works project also made possible by New Deal funds. In his use of texture and his contrasts in light and darkness, Minor White’s photographs lend dignity to buildings considered outdated, impediments to Portland’s progress. His collection of architectural photographs traveled to a number of WPA Art Centers until 1942. They are currently archived at the Oregon Historical Society.

“Parting Shots” also includes White’s work commissioned by the Portland Art Museum to document two of the city’s nineteenth-century mansions in the early 1940s. The Knapp and Jacob Dolph houses, although ranked among the best of the city’s residential architecture, were demolished relatively soon afterwards (1953 and 1942, respectively).

While the exhibit will be open through December 23, 2017, two lectures will be given this week that are worthy of immediate notice. Dr. Kenneth Hawkins, who compiled the first inventory of White’s WPA negatives at the Oregon Historical Society in 1978 and assisted in compiling the Princeton University Art Museum catalog of White’s work, will present two lectures at the Architectural Heritage Center on May 18th and 20th. For further details on the lectures and exhibit, please visit the AHC website.

Judith Kenny is a retired professor of Geography and Urban Studies from the University of Wisconsin-Milwaukee and a Living New Deal Research Associate, now based in Portland, Oregon. She is also a member of Portland’s Architectural Heritage Center (AHC) Education Committee.