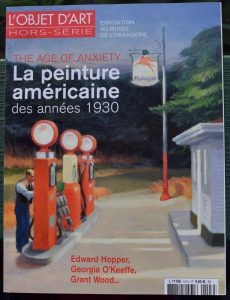 Art of the 1930s may finally be coming back into fashion—something that New Deal aficionados can celebrate.

It has been a long time since a major exhibit of art from the 1930s has been mounted, but curators at the Art Institute of Chicago rectified that last summer with an installation, originally titled “After the Fall: American Painting in the 1930s.” I saw the exhibit this winter at Musee de l’Orangerie in Paris. It has since moved to London’s Royal Academy of Arts, where it will be on display until June 4, 2017.

The exhibit is extremely well done in terms of the selection of the 45 paintings and the explanatory text on the walls and in the catalogue. The latter provides a succinct introduction to the Great Depression and how Americans reacted to it. The exhibition includes works by such noted artists Georgia O’Keefe, Edward Hopper, and Grant Wood, whose iconic American Gothic had never left North American shores before. But the exhibit goes well beyond, taking in lesser-known painters of remarkable talent, such as Alexander Hogue and Paul Sample. 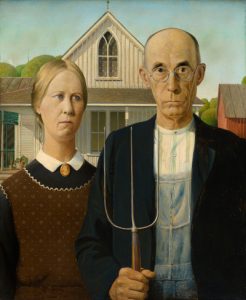 American Gothic, Grant Wood, 1930
Grant Wood used his sister and his dentist as models for a farmer and his daughter

The predominant Social Realist and American Regionalist styles of the time were largely eclipsed by postwar Abstract art in the United States and regarded as backward by European art historians fixated on the early modernism represented in Cubism, Constructivism and Surrealism.

The international audiences viewing the exhibit at the l’ Orangerie were clearly delighted by this refreshing look at a kind of American art they rarely see and the excellence of the works on display. Surprising were the number of early experiments in Abstraction as well as some fiercely political paintings, like Philip Guston’s Bombardment and Joe Jones’ American Justice.

From the perspective of the New Deal, however, there were some glaring absences. An exhibit devoted solely to framed paintings necessarily omits the mural art characteristic of the age, when artists such as Thomas Hart Benton, Ben Shahn, and Aaron Douglas were probably better known for their public murals than their canvases. Another is that while FDR’s programs are briefly mentioned, and the hiring of artists by federal programs noted in passing, the term “The New Deal” does not appear in the exhibit, as far as I could see. Talk about historical amnesia! This is, alas, all too typical of art historians and curators, who are taught to treat art as something apart from politics and social life.

Evidently, our task at the Living New Deal is not just to uncover a buried civilization of public works, but to revive the memory of all the artwork created under the auspices of the Roosevelt Administration in the 1930s.

One comment on “Art Review: American Painting of the 1930sby Richard A Walker”